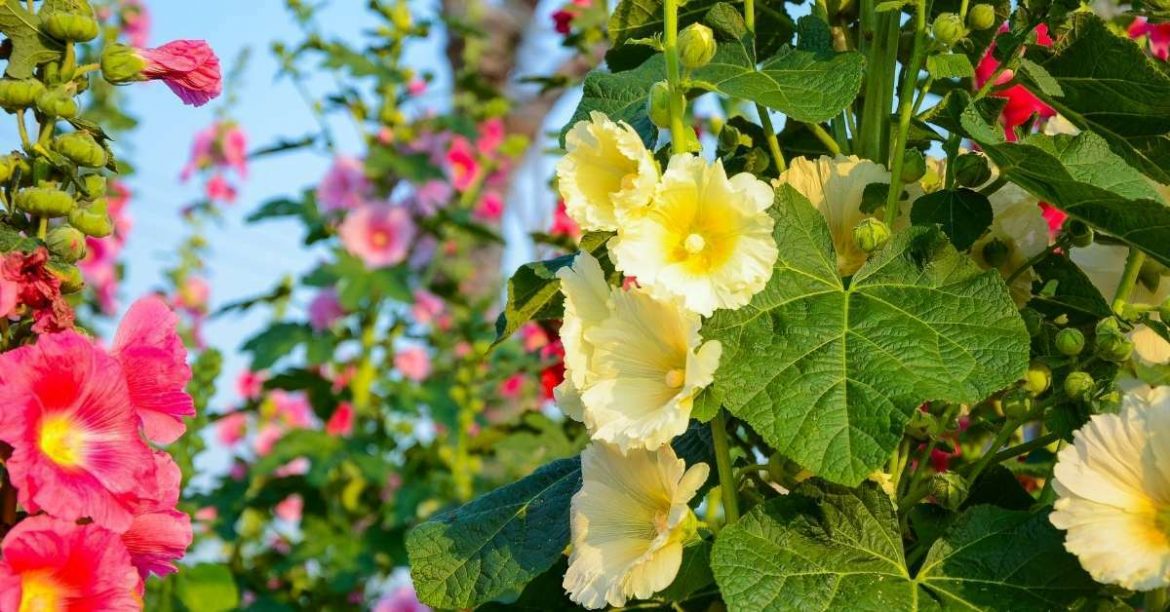 I really like hollyhocks, and this past week, I was out in the old herb garden this week wandering around, trying to decide what to do with the fence around this part of the garden (it needs rebuilding). I was struck by all the old stems that were still sticking straight up in defiance of winter winds and temperatures.

They have colonized this section of the garden quite nicely (with a bit of help from yours truly), and I’m pretty delighted to have them here.

You might want to see this: Ultimate Ways To Get Rid of Moles in The Yard in 2021

Hollyhocks, or as the Latin purists will have us, Alcea species, are wonderfully easy plants for the beginner gardener. But while they are indeed easy to grow, there is one decidedly potential problem with the plant.

A disease called Hollyhock Rust (the real name is Puccinia malvacearum – now you know why we simply call it “rust”) can disfigure the leaves under severe infestations.

Indeed, the thriving hobby of breeding new varieties was all but ended when this rust struck the horticultural world. Rust shows up as reddish pustules (raised bumps) on the leaves, and if you grow hollyhocks, you’ll have rust. It is that widespread. It even overwinters in cold climates by infecting the plant crowns.

Some experienced gardeners remove the first two leaves from the plant in an effort to reduce the number of overwintered spores and claim this works well. Others continually spray with lime sulfur to reduce the spread. While there is no cure for this disease, it usually only kills and really bothers those plants that are under stress.

So, feed your plants with lots of compost and don’t allow them to dry out in the summertime to reduce the stress levels.

As I said, this plant is easy to grow, and I started my thriving colony by sprinkling some seeds along the fence in early spring and allowing them to start themselves. I probably lost a few to mice, but you’d never know it from the way they are thickening up now.

Full sun and fertile soil will do nicely for this plant. It may have trouble with clay soils and overwintering if those soils are wet during the winter.

As biennials, they will not usually flower the first year from seed. They need to grow that first year, survive the winter, and then send up those huge flower stalks the second year. Unfortunately, the mother plants then die after flowering is finished. I have seen some plants defy this rule and bloom for several years in a row.

Self Sowing with Help

I collect all the seed pods and crush them in my hand to spread the seed where I want it in my garden and then pull out the old stocks and plant crowns to try to reduce the disease overwintering.

While I’m not sure I’m doing anything in this regard, it does make me feel better. The stalks that are still in my garden are mute accusers that I didn’t quite finish off my fall cleanup.

So, if you want to start your own colony, a seed package spread on the soil and lightly covered (1/8 inch deep) and kept damp until germination occurs will quickly colonize your garden.

You might read this: Poisonous Aconitum: Growing Monkshood Plant From Seeds

The most common variety you’ll find in the seed catalogs is Alcea rosea. ‘Chaters Doubles Hybrids’ is a trendy variety because it has double flowers and still stands up well in heavy winds.

A. Rosea ‘Nigra’ is a very dark maroon color that is often sold as a black color. After seeing it with the sun behind it, you’ll quickly see it is maroon and not black.

‘Indian Spring’ is a single bloomer in mostly rosy shades of red with a few yellows thrown in for good measure.

‘Summer Carnival’ is also quite famous as it is a dwarf variety. I’ve never liked the dwarf varieties (I like my plants huge), but a lot of gardeners with smaller gardens grow them.

For the last few years, a plant that I have enjoyed is the Alcea ficifolia – the Fig-leaved Hollyhock. The leaves are slightly different than the commonly grown A. rosea hybrids, and the flowers are a pale lemon yellow. Otherwise, they are the same.

I let this one self sow around the garden and simply remove excessive seedlings in the spring. The best flowering plant this year was one that escaped into the pathway and threw a dozen stalks or more flowering stalks.

After the plants have bloomed, simply cut off the flower stalks (after the seed pods have gone brown and are splitting open). Then crush the pods to separate the seeds out and scatter them throughout the garden for next year’s blooms.

How to Plant Coreopsis or Butter Daisies