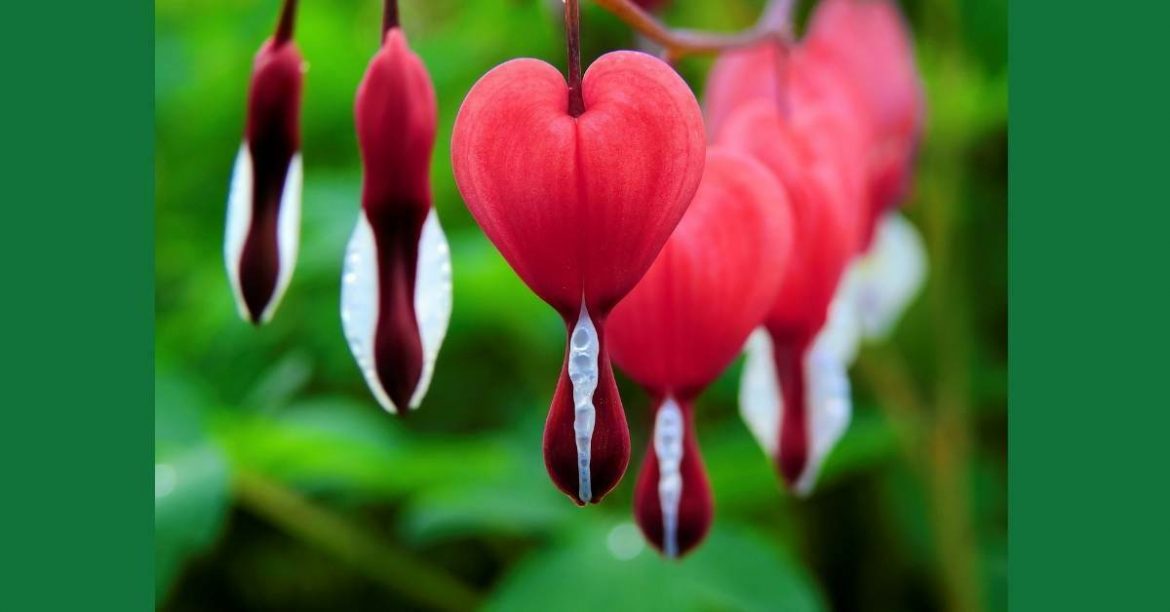 If you’ve ever seen a shade or woodland garden full of beautiful pink heart-shaped flowers and wanted the same blooms for your yard, you’re in luck.

In Latin, Asian bleeding heart flowers, known as (Lamprocapnos spectabilis, formerly as Dicentra species), are relatively easy to grow if you follow a few essential rules.

These spectacular-looking plants blossom in late spring and early summer, with mounds of green leaves that look a bit like parsley and arching, leafless stalks bearing the “bleeding hearts” that give the plant its name. They can be grown in many places throughout the US, from zones three through nine.

Most Asian bleeding heart bushes grow to about two to three feet tall, although they can be as small as one foot and as large as four. They are perennials, which means that once planted, they will return again year after year on the same spot when adequately cared for.

They are relatively disease-free, significantly when watered correctly, and bleeding hearts are deer resistant as well. To enjoy this popular species in your garden, read on to learn ten important tips for Asian bleeding heart plant care.

Planting bleeding hearts is essentially a matter of selecting the correct location in the yard.

In very cool areas where they can tolerate a little more sun, bleeding hearts need partial to full shade. They are ideal for those woodsy corners of the yard that might be too dark for other species.

Bleeding hearts are also like rich, humus soil. The ground should be well-drained but able to stay moist between waterings. If the soil quality is poor where you want to plant a bleeding heart, improve it first with some compost or very weak fertilizer.

Ensure the soil is loose enough to provide proper drainage; it should be loamy, with not too much sand and clay. The addition of peat moss can help you maintain the appropriate moisture balance.

2. Give your bleeding heart plant the right amount of water

You might want to call the bleeding heart flower “Goldilocks” because it likes its moisture levels “just right.” If the soil is too dry, the plant won’t flower, or the foliage will die off early in the season. If it’s too wet, the roots can rot, causing the entire plant to die.

Ideally, you want to water your Asian bleeding heart plant several times to get a feel for how long you need to water for the moisture to penetrate to the root level and how long the ground stays moist. Once you figure out your plant’s water needs, put it on a regular watering schedule whenever there is no rain.

Early morning or late afternoon are good times to water, as the moisture won’t evaporate too quickly, nor will it pool too long and increase the risk of root rot.

Mulching is a great way to protect your bleeding heart bushes and enrich the soil simultaneously. As the mulch breaks down, it adds nutrients to the soil and feeds the plants. You can mulch your bleeding hearts in both the fall and the spring with compost, leaves, or other garden debris.

4. Maintain your bleeding hearts according to natural seasonal changes

As an herbaceous perennial, the Dicentra species undergoes a series of natural transformations throughout the year. Foliage for the plant will start to appear in early to mid-spring, and the plant flowers from late spring through the early summer.

On rare occasions in cool climates, a bleeding heart may flower twice, but this species generally only blooms once, so there is no need for deadheading or removing spent blossoms.

Depending on the amount of sun the plant receives and how dry it is, the greenery and stems will start to turn yellow and brown once the flowering period has passed. At this point, you can cut the plant to the ground if it becomes unsightly. If you do nothing, the bleeding heart will usually just die back entirely by the end of autumn.

While you can grow Asian bleeding hearts from seed or propagate them by root cuttings, the easiest way to create more plants from your existing ones is to divide them periodically, about once every three or four years. Bleeding hearts develop thick roots at the base called “rhizomes.” You can dig up a plant, split the rhizomes with a garden spade or fork and create two or more plants from one.

The best time to do this is in the fall after the foliage is done. If you have a neighbor with different varieties of bleeding hearts (see below), you can trade split plants to try out each others’ variations.

Another way to brighten the forested or shady parts of the garden is to use the “Golden Heart” bleeding heart flower. This variety has striking yellow-green foliage, which is a nice counterpoint to the more common “King of Hearts.”

7. Pair your bleeding heart to show it off in your garden

In addition to pairing different types of bleeding hearts to accentuate them, you can select other species that will also showcase your heart-shaped flowers. Asian Bleeding hearts look splendid next to ferns and hostas, which also thrive in shady locales. Trillium and astilbe make good companions for bleeding hearts too.

Try to choose neighboring plants that will fill in the space a bit when your bleeding hearts die back later in the season. If you’re left with a gaping hole, you could also fill the space with shade-loving begonias or impatiens. If you’re worried about inadvertently damaging the roots of your bleeding hearts, you can always stick a potted shade plant in their empty space post-bloom.

8. Mark your bleeding heart spots in the garden

Because bleeding hearts can completely disappear by the end of a fall, it can be easy to accidentally dig them up when planting fall bulbs or transplanting other perennials. If you’re worried about doing this, put a marker in your garden where every bleeding heart is rooted, so you’ll remember where it is.

As beautiful as the Lamprocapnos spectabilis is, it can be deadly, and all parts of the plants are poisonous. Take care to keep kids away from bleeding hearts, and it may be best to plant this flower where your pets can’t get at it either. Keep it out of the part of your yard where your dog romps, and take care to omit it from your horse pastures.

Just touching the plant can be an irritation to humans, too, so wear long sleeves and gardening gloves when planting or transplanting bleeding hearts.

If you don’t have a yard or ameliorate the soil in your garden isn’t possible, you can still grow bleeding hearts in containers, provided you have sufficient shade. A sheltered balcony, stoop, or terrace makes an ideal place to enjoy your bleeding hearts in pots.

While Lamprocapnos spectabilis  is the normal garden variety, Dicentra Formosa only grows to about twelve inches tall, so it makes the perfect Asian bleeding heart for a container garden.

Lamprocapnos, with its gorgeous heart flowers and delicate foliage, is a wonderful addition to many yards. Once you get the hang of how to care for bleeding hearts, you’ll be able to have many thriving plants in your yard, and you can divide and share them at will. Follow the advice above, and you too can enjoy these perennial winning favorites.

When do bleeding Hearts bloom?

Bleeding heart flowers bloom from mid-to-late spring to early summer, die back during the hotter months, then return the following season in all their glory. In USDA Hardiness Zones 3-9, bleeding hearts will flourish; however, bloom dates may vary.

When to transplant bleeding hearts?

Although bleeding heart can be transplanted at any season, it is less stressful for the plant if done in the early spring or fall. Cut back any stems and leaves and move the plant to a new area if it is suffering in its current setting. Every three to five years, bleeding heart plants are split.

How do you keep a bleeding heart blooming?

Can a bleeding heart be rooted?

Both root cuttings and seeds can be used to grow a bleeding heart. On the other hand, Root cuttings will produce a transplantable specimen that will more dependably reflect the mother plant’s attractive blooming traits.

What is the best fertilizer for bleeding heart?

As best practice, you can fertilize the plant regularly with ¼ cup of a 5-10-5 fertilizer every six weeks.

Are Bleeding Hearts poisonous to dogs?

When eaten, the buds and blooms of the Bleeding Heart plant are poisonous and can cause vomiting and convulsions. Humans would have the same results as dogs, although it’s doubtful that you’ll start eating in your garden tomorrow.

Are Bleeding Hearts poisonous to touch?

When eaten or touched, all components of the bleeding heart plant are poisonous. A gentle touch irritates the skin. Vomiting, diarrhea, seizures, and trouble breathing are among the symptoms of eating the plant.

In zones two through nine, Bleeding Heart thrives. They demand some shade, as well as well-drained, moist, but rich soil. The plants will reach a height of two to four feet and a spread of one to two feet. Although they are non-aggressive, some will self-seed in wet places.

In wet and cold regions, bleeding heart grows best in moderate shade, although it may take full sun. Plants prefer early sun and afternoon shade in most climates. They also require well-drained soil, as they will rot if it is too wet.

Can you propagate bleeding heart in water?

Cuttings or serpentine stacking are both effective ways to grow bleeding heart vine. Water, wet sand, or other media can be used to root semi-ripe tip cuttings obtained in late spring or late summer. In approximately 2 weeks, roots should emerge. Spring is also a good time to sow seeds.

How do you thin out a bleeding heart plant?

Slice through the roots with a sharp knife — the Soil Knife works wonderfully for this — ensuring sure each division contains at least one of these buds, preferably two or three. Any fleshy or hollow roots should be cut out and discarded. Reset the roots as soon as possible; do not allow them to dry out.

No, rabbits don’t prefer eating bleeding heart plant. They are unlikely to consume it because it is one of the spring bloomers they avoid, along with chives, catmint, alyssum, calendula, cleome, dahlias, dianthus, lavender, lamb’s ear, foxglove, columbine, daffodil, crocus, fleabane, iris, forget-me-not, catmint, hellebore and violet.

Fight Pests: This Is How You Can Use The Beneficial Insects Againist Pests In Your Garden