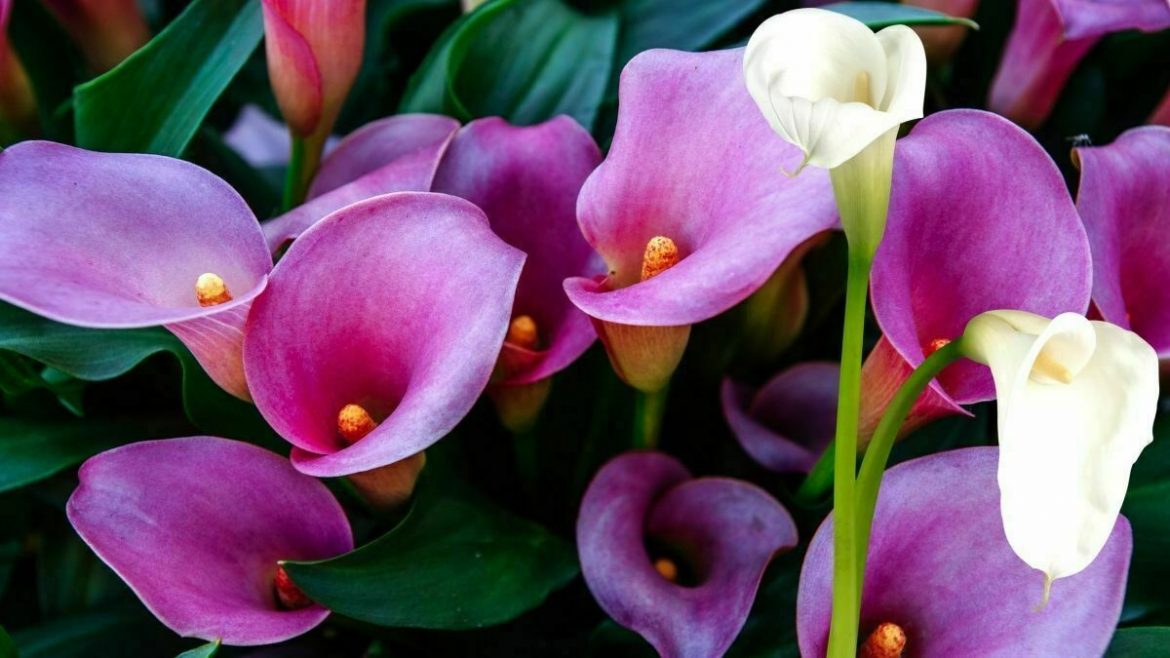 It is popular in bouquets, but also as a houseplant and in gardens. But very few know: the Calla Lily is poisonous. We will show you how to care for, prune and winterize the houseplant properly.

The Calla, with its noble leaves, is an elegant classic among house plants. The originally South African plant with the botanical name Zantedeschia can also be planted well in the garden – but it is rarely winter-proof.

How to properly care for the Calla Lily?

Calla is characterized by the fact that each individual shoot ends in a flower bulb. A bract encloses this. The bract can have different colors: from light white to yellow to red.

Their flowering period ranges from three to eight weeks. The inflorescence is surrounded by arrow-shaped and dark green, sometimes speckled leaves, which give the Zantedeschia abundance.

What’s the meaning of Calla Lily?

The name Calla is translated as “beautiful” and goes back to the Greek goddess Calliope, who, according to legend, should have been very beautiful.

The onion plant got its scientific name Zantedeschia from its discoverer, the Italian botanist Giovanni Zantedeschia. After the Calla found its way to Europe in the 18th century, it is still cultivated as a popular potted plant today.

Care tips for the Calla Lily as a houseplant

The Zantedeschia aethiopica is usually cultivated as a houseplant or room calla. It blooms from January to April. In the vegetation phase from the end of February or the beginning of March, the plant should only be watered moderately. From May, this calla species is in its dormant phase for two to three months.

Care tip: Spend this at low temperatures in an unheated room. In doing so, it does not need light or water.

You can water the plant more often when the next growth phase begins in September. Twice a week is sufficient for the Calla.

The substrate should never dry out completely during the growth phase. Make sure, however, that no waterlogging forms. In the growth phase, fertilize the flower every two weeks, preferably with liquid fertilizer or flowering plant fertilizer added to the irrigation water.

These calla species are suitable for the garden.

In contrast to Zantedeschia aethiopica, the Calla elliottiana and Rehmannia species bloom in summer. They make good garden or container plants. The Calla generally prefers a sunny location with temperatures of twelve to 25 degrees Celsius.

Cut off the withered flowers and yellow leaves of the Calla.

Yellow leaves can also indicate care errors in the Calla, for example:

Before winter, free the calla bulbs from soil and store them separately in a cool and dry place such as the cellar – this is how dahlias, for example, overwinter.

In the spring, put the calla onion back in normal potting soil and put it in a warm place to propel it. If you want to plant the Calla in the garden, it can be outdoors from May when the weather is mild enough.

Tip: The Calla as a container or houseplant can also overwinter in a pot with soil. Then it is best to repot the plant in spring and remove dead roots from the tubers.

New cultivars of Calla can even tolerate frost and can therefore overwinter in the garden. This applies to the variety Zantedeschia aethiopica ‘Crowborough,’ which is said to be winter-proof down to minus 20 degrees. It can be planted from March to May and flowers from June to August.

The Calla is considered to be relatively susceptible to pests and diseases. Often improper care is responsible for this. Here are some things to look out for:

The information center against poisoning classifies the room calla as slightly toxic. Leaves and flowers can irritate the mucous membranes when ingested. If large amounts are swallowed, there is even a risk of massive damage to the gastric mucosa. Blistering of the skin is also mentioned as a possible symptom.

Location The Calla thrives in a very light and sheltered place.

Temperature The Calla thrives at 12 to 25 degrees Celsius; it shouldn’t get colder for the sensitive flowers.

Watering: The Calla is adequately supplied with water once or twice a week. The substrate should never dry out completely, but excess water should be poured off regularly to protect against rot.

Fertilize During the growth phase from mid-February; you can use a liquid fertilizer every two weeks. If the Calla is in bloom, a weekly application of fertilizer will extend the flowering time.

In regions with a cooler climate, these plants may be cultivated as annuals, or they can be dug up in the autumn and brought inside to overwinter until the following spring.

Is a calla lily an outdoor or indoor plant?

Even though by its very nature it is an outdoor plant, the Calla Lily may also thrive when grown in an inside environment.

When growing this rhizome indoors, it is important to pay attention to a few very fundamental aspects of the growing environment in order to ensure its success. Southern Africa is the natural habitat of the Zantedeschia aethiopica plant.

Do calla lilies come back every year?

The majority of individuals grow their calla lilies as annuals in their homes. They have given a flower pot as a gift or purchased one as part of their spring decorations, but they discard it after the flowers have finished blooming.

Calla lilies, on the other hand, are perennial plants, which means that you can really keep your potted plant and watch it bloom again the following year.

The diameter of the pots used for calla lilies should be at least 10 to 12 inches (25-31 cm) and they should have enough drainage. Calla lilies need soil that is kept continuously wet; yet, soil that does not drain properly may lead to rot and fungal illnesses.

Additionally, the planting medium has to be able to hold water without becoming too saturated.

In an active stage of development, calla lilies may survive in pots for around four months. This comprises a phase of leaf development during the first six weeks, which is followed by a time of flowering that may last anywhere from six to eight weeks.

Following the completion of flowering, the plant’s leaves will start to turn yellow and eventually lose their color before becoming dormant.