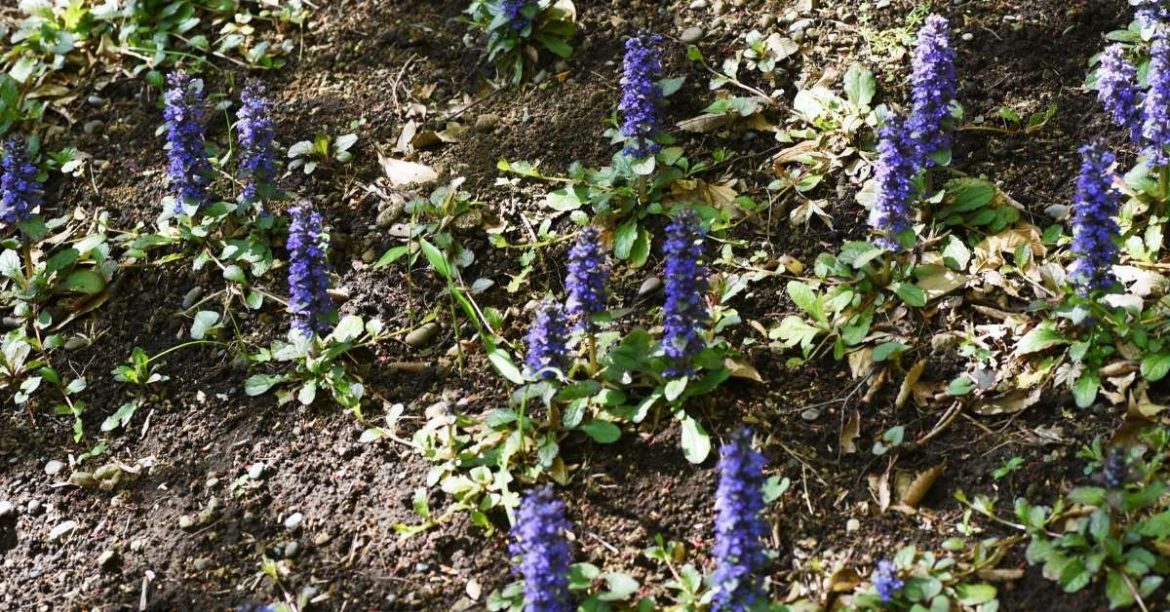 It is a hardy plant – surviving nicely in USDA 3 to 9.

Ajuga prefers light shade to full shade and tends to be smaller, shorter, and less healthy in the full hot sun. And in an area that it likes, it will grow 2 to 5 inches tall (depending on variety) and spread to 12 to 18 inches or to the entire yard (whichever comes first).

Yes, it is a spreader weed. But it spreads over the ground, so you can (and should) contain it with a shovel by edging every spring and mid-summer. As a ground cover, I have found its spread to be slow but steady.

This is in comparison to other more aggressive ground covers such as goutweed. It will invade lawns and becomes a major pest (derisively referred to as “bugle lawn”)

Yes. Ajuga is one of the 266 genera in the Lamiaceae family, and its plants are evergreen, clump-forming rhizomatous perennial or annual herbaceous blooming species. The genus Ajuga has at least 301 species, each with its own set of characteristics.

These plants, which may be found in Europe, Asia, Africa, Australia, and North America, are utilized as a ground cover or border in gardens because of their attractive leaves and blooms.

Is Ajuga Edible? What are The Bugleweed Benefits?

Many of these plants have been used in traditional medicine as anthelmintic, diuretic, antifungal, anti-inflammatory, and antimycobacterial medication, as well as for fever, toothache, dysentery, malaria, high blood pressure, diabetes, and gastrointestinal problems.

Will Roundup or Natria Kill Ajuga?

Yes. Any weed control product will also kill Ajuga. However, there isn’t likely to be one designated to destroy ajuga in a lawn selectively. We suggest waiting until early autumn (late August) to apply glyphosate herbicide on the areas on your lawn. Glyphosate is a complete herbicide. As much as possible, get it on the Ajuga.

Would Ajuga Do Harm to Other Plants?

Bugleweed fights for space with other grasses, with common grass usually emerging victorious. Trimming back the bugleweed while allowing the different grasses and plants to grow would most certainly kill the weeds, but this method may take more than one season to work.

Ajuga weed grows well in average soil but will survive in soils with more clay or sand as major components. It will winter kill (rot) in heavy clay soils.

Given the above, if you want to see flowers, you do have to provide adequate water when the plant is in the shade. This is particularly true when it competes with aggressive tree roots. This is not a plant for dry shade.

Interestingly enough, there are gardener reports of this plant doing quite well in damp areas in spring and early summer but dry up for the fall.

It requires no special care. Put it in the ground, water for a few weeks to get it established, and then let it alone.

Some companies advertise it as being able to be walked on. I wouldn’t bet the farm on this; it might take a light walking over once or twice, but it will not handle regular foot traffic.

Ajuga blooms (generally with a deep, dark blue) in very early spring and sporadically after that. And you’ll see a range of foliage colors ranging from greens to bronzes, multi-colors, and almost purplish blacks. The only Ajuga I’ve found tricky is the multi-colored foliage plants; they are not reliably hardy into USDA zone 4.

The only problem you’ll sometimes see with Ajuga is a little botrytis or grey mold. This will cause some leaves to shrivel up or flowers to abort. A fungicide spray with lime sulfur should stop this.

How to Propagate Ajuga weed?

In spring, divide this plant and replant immediately.

Eat These Organic Foods For a Perfect Tan!

Ornamental Onions: 5 Alliums You Can Grow in Your Garden