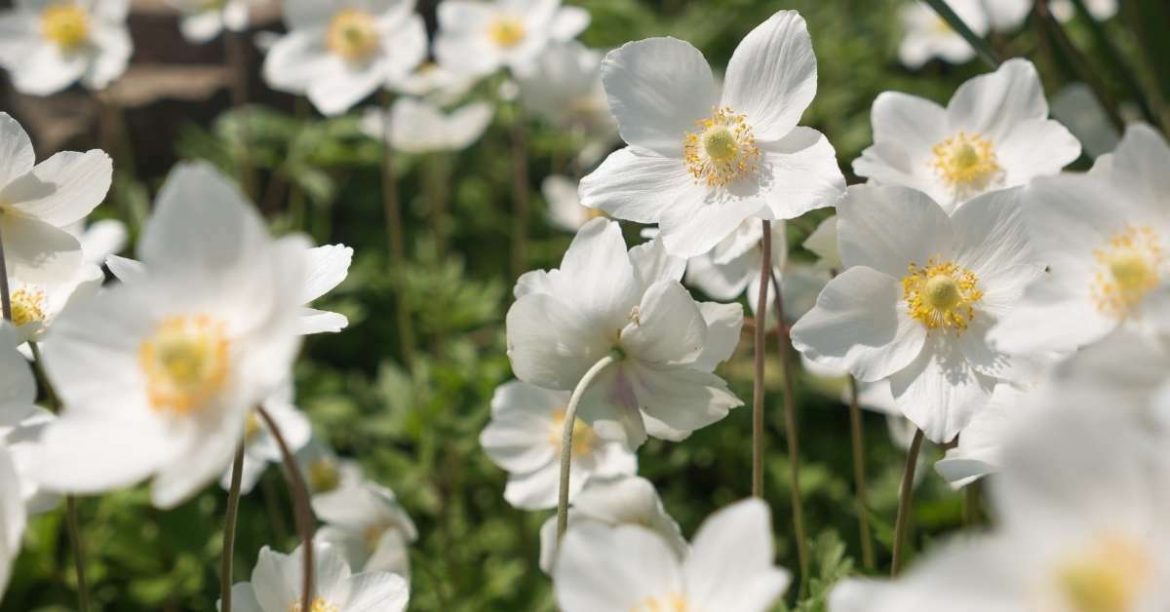 Anemone; this is a rather broad family of plants, and they come in several classifications from the very tender to the quite hardy. The “bulb” kinds have been dealt with here on my bulb site, and this page outlines some of the more commonly available herbaceous species and varieties.

Keep reading to figure out how to grow perennial Anemone Flowers in your garden.

These plants mostly come with various levels of warnings about their aggressive tendencies. Although they are lovely bloomers, they do require controlling with a firm shovel to keep them in check.

How to grow Anemone

Grow in full sun in almost any soil (except heavy clays), and they’ll grow well. I’ve grown them in sandy ditch-digging soil as well as good garden soil (interestingly enough, they grew better in poor soil than the rich garden soils).

Heights are listed under varieties; the spacing is as far apart as you want them to grow because they’ll take everything you give them.

Anemone hupehensis or Japanese Anemone is a lovely flowering plant with a range of flowers (from singles to semi and full doubles) and bloom colors (mainly in white to the pink range) all within this variable species.

How big does Anemone grow?

It grows 24-30 inches tall and equal width. Hardy to a USDA zone 5, it is a lovely little plant (not as rambunctious in the garden as those below). ‘Prince Henry’ is a variety sometimes seen with its semi-double, rose-mauve flowers.

Anemone sylvestris is a real and true garden thug. It is almost impossible to eradicate once introduced, and I wouldn’t wish this plant on my worst enemy. It is a lovely little plant, however, with its 24-inch tall, pale white flowers.

Its flowers will charm the socks off you just before it starts shooting seed over the garden and sending runners underground to find them. It came from wild seed in my former garden, and I worked (unsuccessfully) to eliminate it from the garden for three years.

Anemone tomentosa, also known as the Pink Grapefruit Anemone, this soft pink August blooming species, is described as “vigorous” in several plant catalogs. This means it spreads somewhat less than wildfire but more aggressively than the Vikings invading medieval Europe.

It is a lovely flowering plant reaching 36-40 inches tall and as wide as you’ll let it get.

It is quite hardy – down to USDA zone 3. Propagate by division in the early spring and control it tenaciously the same way by digging up excess shoots in the early spring. Having passed on a realistic warning about its aggressiveness, it is a great blooming plant for the back of the perennial border.

Anemone x hybrida is a catchall term for different hybrids on the market. All grow in much the same way – aggressively in the full sun or light shade and in almost any soil. All are hardy to a USDA zone 4, and I’ve grown many of them at one time or other in my garden to see if any were less spreading (no).

Having said that, I would have them again, particularly the lovely white blooming ‘Honorine Jobert’ with its masses of gorgeous pure white blooms.