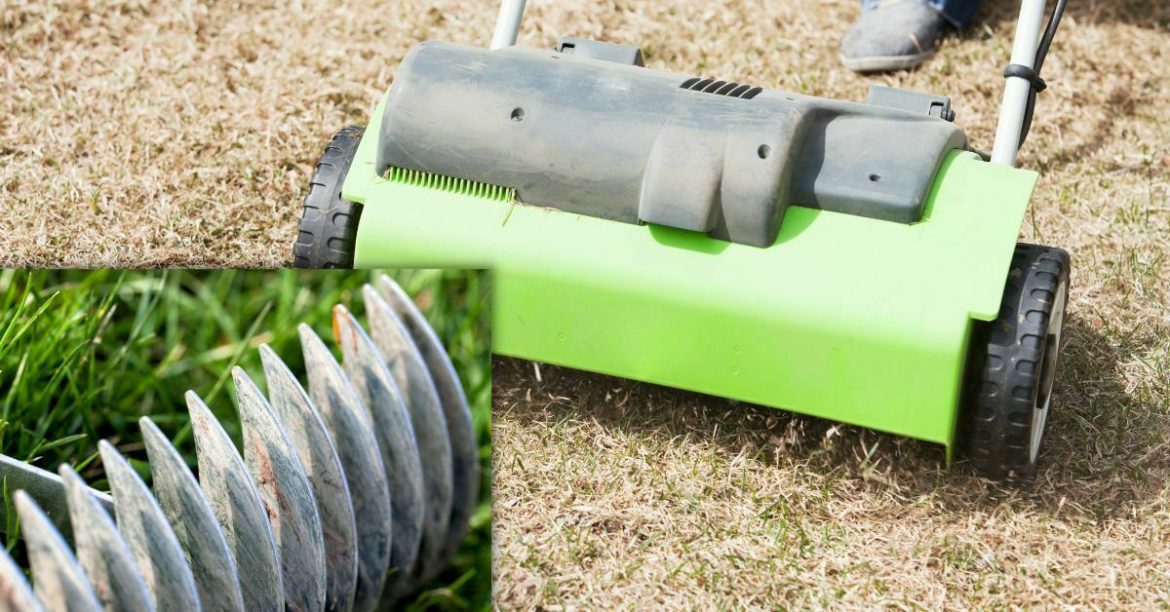 Maintaining healthy thatching levels is an essential part of keeping your lawn the envy of the neighborhood. Unfortunately, it’s not always a simple process. There’s a lot that homeowners need to know to keep their thatching under control.

Today we clarify the importance of detaching your lawn, and although some amount is acceptable, why do you need to avoid big amounts of thatching.

What is Lawn Thatch? Thatch is a layer of dead vegetable matter, earth, and debris that accumulates on your lawn above the soil level. It accumulates on the ground, below your grass, slowly consolidating into a semi-solid mat.

Why Does Thatch Matter?

A very small amount of thatch is normal and often signals a healthy lawn. However, if it starts to accumulate, it can become a problem. When that accumulation forms, its individual parts don’t decompose. The twigs, straw, leaves, and clippings from nearby plants get compressed into a single mass. Instead of quickly dissolving into a rich fertilizer, this material becomes stagnant and solid.

If a thick level of thatch starts accumulating, it can start choking your grass. It prevents water, fertilizer, and sunlight from reaching much of your lawn. It also discourages new seeds from sprouting. The thicker thatch gets, the faster it grows, eventually forming a tough, spongy layer over your entire lawn.

The process of dethatching can be labor-intensive and destructive to your lawn. It’s usually better to prevent the problem from occurring in the first place. The first thing you can do it to regularly rake up fallen plant materials, such as pine straw, bark, leaves, and sticks. Remove this excess material from your lawn.

When you mow, you usually want to leave the grass clippings if possible. These provide valuable fertilization and usually decompose very quickly. However, sometimes even this clipping can accumulate into thatching if there’s too much of it. In that case, you can try using a mulching attachment on your lawn mower. This will disintegrate the clippings into tiny particles that will dissolve very quickly into the soil.

If a layer of thatch does accumulate, you’ll want to identify and remove it as quickly as possible. Periodically check under your grass for a mass of material covering the earth. Usually, you should be able to see your soil without too much effort. If you can’t, you need to consider dethatching.

There are several dethatching strategies you can employ. However, the best choice for individuals is often just working on the lawn with a thatching rake. These tools are specially designed to dig into a thatch layer and pull it up off the ground.

Systematically dethatch your entire yard with this rake, digging up accumulated plant matter. It will probably make a bit of a mess for a short time, but that’s ok. Your lawn will recover. Rake up and dispose of your dug-up thatch, then water and fertilize your lawn afterward. If you’re still having trouble with dethatching, call a professional lawn care company to help you with the problem.

What happens if you don’t dethatch?

Lawns can be negatively affected by having an excessive amount of thatch. Because it is difficult for water to penetrate a thick layer of thatch, the water tends to flow off rather than being absorbed by the ground.

It can provide a haven for pests and illnesses that affect lawns. It may cause the grass to begin growing in the thatch layer rather than in the soil, which results in shallow root systems and subjects the grass to more significant climatic fluctuations.

How do you get rid of thatch naturally?

Here watch the video to learn about it:

How do I know if my lawn needs dethatching?

If your thatch is 1–2 inches or more, you have probably already noticed evidence of poor grass color and weak, thin growth. If your thatch is less than 1 inch, you should not worry about these issues.

The moment has come to remove the thatch if it has been established that the level of accumulation surpasses what is considered to be healthy.

What month should I dethatch my lawn?

When your grass is actively developing, and the soil is only slightly damp, dethatching it is one of the finest things you can do for it. Early in the spring or early in the fall is the best time to sow cool-season grasses.

You should dethatch warm-season grasses between the end of spring and the beginning of summer (after the second mowing). During this time, your grass will be growing at its fastest rate.

Can dethatching hurt your lawn?

When a lawn is already in a vulnerable state, dethatching it in the spring can be very damaging. Second, if you dethatch your lawn in the spring using power equipment, you run the risk of bringing up crabgrass seeds and of other noxious weeds, which will make your lawn more susceptible to subsequent infestations.

Is aerating and dethatching the same?

Not exactly. Aeration pulls out real plugs of soil from your yard, whereas dethatching gets rid of the coating of thatch that sits on top of the soil. Root systems are able to expand outward and develop deeper into the ground when the soil is more aerated and contains more nutrients.

Even if holes in your yard are unsightly, you shouldn’t worry since they’ll soon be covered with thick, thriving grass.

What is the difference between scarifying and dethatching?

The difference comes from the characteristics of the tools.
The primary distinction between a scarifier and a dethatcher is that scarifiers remove the whole layer of thatch from the ground along with all that is beneath it, whereas dethatchers leave a little amount of thatch in the ground after their operation.

Even though they function somewhat differently, scarifiers and dethatchers are both considered to be devices or instruments that are utilized in the maintenance of lawns.

Why is my lawn so spongy?

There may be an accumulation of excess grass runners in your turf if it saw a significant quantity of growth in the years before the current one. These runners will ultimately die, and then new grass will try to grow on top of the old grass.

However, because of this, the roots of the plant may receive less oxygen and water than they otherwise would.

Can you dethatch with a rake?

Use a thatching rake, which is a type of rake with sharp tines that pulls the thatch off of the grass, in the early spring and for areas that are not very large. It is possible to use leaf rakes or hard rakes, but the results may not be as satisfactory.

Rake the grass, being sure to dig down quite a ways to get into the thatch and break it up.

Will a thatch go away on its own?

It can take a few years, but eventually, the thatch will be completely broken up and removed. The following are some additional considerations and suggestions that can assist you in getting rid of thatch through decomposition: It is essential to maintain a damp environment in the soil below the thatch layer. When it dries out, decomposition ends.

How to Get Rid of White Roaches (Albino Cockroach)

Warding Off Destructive Wild Animals from the Garden

Robotic Lawnmower: This is Why You Need To...