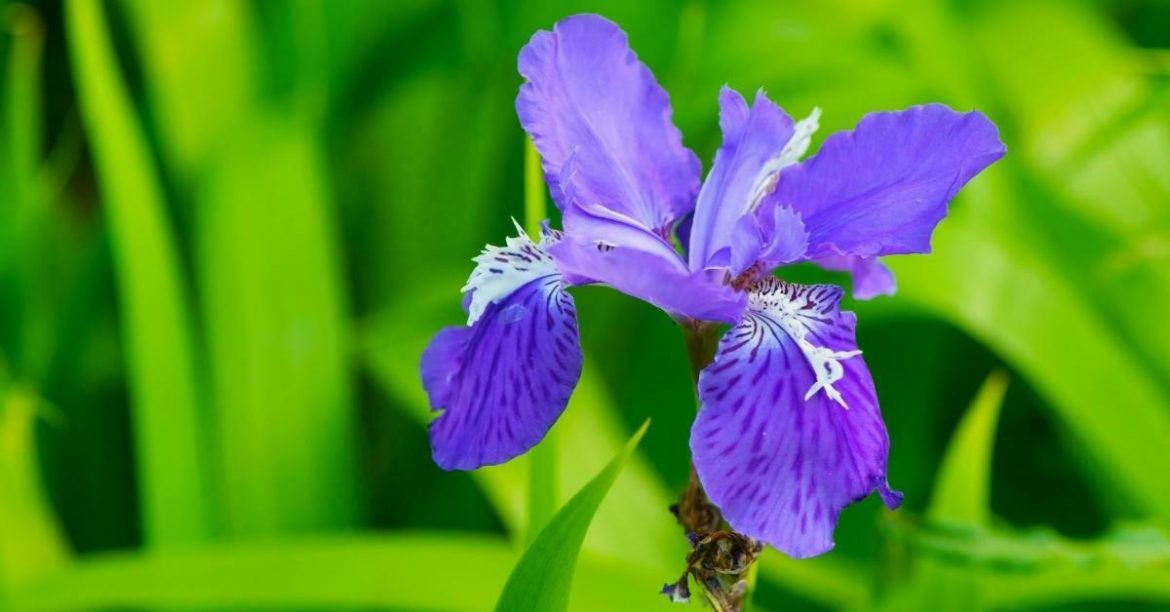 Arctic iris or the dwarf Iris setosa var arctica is one of those delightful dwarf iris that belong in almost every rock garden or tough spot to grow something in.

This species of Iris is endemic to Siberia and Alaska and has short, grassy leaves. It grows in a low tuft of sword-shaped, brilliant green leaves. Late in the spring, masses of tiny three-petaled blooms develop, lavender-blue with silvery-white veining.

Cold tolerant to a fault. This plant is excellent for edging or in a sunny rock garden. It also works well as a groundcover when bulk planted. It prefers moist, well-drained soil. In early fall, it’s simple to split.

How To Grow Dwarf Arctic Iris

Put it in the ground. This is one of the toughest of a tough family.

It will be fine if you plant it at the same depth as it was in the small nursery pot.

If you got a division from a friend, then simply plant it, so the roots are in the ground, but the part where it starts to swell is out of the ground.

You’ll likely be able to see a line on the plant where it was originally growing in the soil. Plant to this line.

Note that deep planting will retard blooming or kill the plant by rotting.

Full sun is best, although very light shade won’t stop it from blooming first thing in the spring.

I’ve combined this because this is indeed a USDA zone 2 plant. You won’t kill it with the cold unless you never give it any summer at all and keep it in a freezer.

Propagation of Arctic Iris is like any other iris. Divide 4-6 weeks after blooming or just about any time after that.

If the plant gets too crowded and stops blooming heavily, divide it that year.

Immediately replant the small divisions at the same depth as they were originally growing. Give some to your friends because they’re all going to want this plant.

Grow in containers as well as in areas where other bigger plants will not overshadow its dwarf height (8 inches tall in bloom).

I grew mine in a small pot all by itself.

Arctic Iris gets all the problems of its bigger cousins if you grow it in a mixed perennial garden, and you will have to watch out for iris borer.

Irises have evolved to adapt to a broad range of cultural circumstances, resulting in a diverse range of species that can thrive in a number of settings. Their long, thin leaves and beautiful blooms make them one of the simplest species to recognize.

Iris species may be found growing wild on nearly every continent, making them very versatile and appealing to the landscaper, home gardener, or horticulturist.

Irises are commonly offered as cut flowers and as perennial plants that reappear year after year. These plants may lay dormant throughout the winter thanks to the formation of a rhizome or subterranean stem that produces adventitious roots.

During this time, the rhizome will form new growth buds from which the leaves and flowers of the following year will emerge. This type of storage organ enables easy crop division, making it a popular and straightforward crop for many home gardeners once again.

In the floriculture sector, its brilliant and attractive blooms contribute to its worth.

Winter Hardiness and Heat/Drought Tolerance of the Plant

The Arctic Iris is found in Alaska, the United States, and Siberia, Russia, where temperatures fluctuate throughout the year and shorter growing seasons. Based on the USDA Hardiness Zones, these locations encompass a wide range of hardiness zones.

On the other hand, this species was discovered in the Aleutian Islands in Alaska, which are located in zones 7 and 8. Most Iris species, according to Longfield Gardens, can thrive in zones 3 to 9, making them a highly versatile group of plants once again.

The Plant Hardiness Map is an excellent tool for determining which plants will survive the winter in your environment. However, cold is not the only factor to consider when assessing whether plants survive and thrive for many years.

Heat has a significant influence on our plants, particularly during droughts. Heat damage may kill a plant instantly and is just as painful as cold damage due to the sun’s slanted beams that diminish as they approach the Poles.

Heat damage can develop in several sections of the plant is cultivated in the Torrid Zone or tropical zone between the Tropics of Cancer and Capricorn. For example, leaves may drop and lose chlorophyll under high heat, making plants more appealing to insects, and flower buds may wither.

Based on these two factors, Iris setosa subsp. Arctica would be best suited for commercial production outside in hardiness zones 3 to 9 and heat zones inside the Northern Temperate zone (potentially in the Southern Temperate Zone).

When these two variables are combined, regions in Canada and the upper northern United States emerged.

The life mentioned above cycle of most Irises (perennial) and habitat areas allows us to make conclusions based on the probable environmental growth elements required at each production stage.

However, additional research is needed to obtain the more precise information and to discover any special features that these subspecies may possess.

This new crop’s major rival will be other Iris species. Irises are a popular perennial in the United States, owing to their simplicity of care and flowering season, which comes just after the spring bulbs but before the rest of the garden. Customers may wonder why they chose this Iris over others.

The Arctic Iris’ prominent distinguishing feature is its bloom color, a lighter purple with deeper purple veins. However, with additional research into the species’ life cycle, a longer flowering time or vegetative development might benefit, attracting more customers to this crop.