When is an onion not an onion? When they are ornamental onions or allium, of course.

Now, before you turn up your nose at the thought of growing ornamental onions, understand that these are some of the most dramatic and striking bulbous plant flowers. They range in size from small charmers like A. moly right up to the dramatic specimen (you only need one) A. giganteum.

They are well worth a place in any garden with their disease-resistant, heavily flowering, eye-catching displays of color. Have I convinced you yet? Let me tell you about a few of my favorites.

Now, sometimes this one is sold under the name of A. albopilosum, but it’s the same plant – the taxonomists can’t seem to get the message across to some garden centers that the name has changed. I first saw this plant at the Experimental Farm in Ottawa after it had finished blooming, and I quickly realized two things:

1) that it was called the Star of Persia because of this wonderful seed pod that resembled a multi-pointed star, and

2) I wanted one or two or three for my own garden. The flower, a metallic purple, is a beauty, and if planted out in the full sun about four to six inches deep, this star will flower for years in our gardens.

If you decide you need more than one, plant them four to six inches apart to give your early summer a wonderful glow. They’ll be about twenty-four inches tall, so do plant them where they will be easily seen. I particularly like this allium as it begins flowering as the tulips are beginning to decline.

Planting ornamental onions such as the Star of Persia is an easy way to extend the spring bulb blooming season.

Its name says it all. This is truly a huge flowering bulb as it reaches forty-eight inches tall on the stalk and produces a massive six-inch blossom.

This one is quite hardy, is never bothered by pests (unless these pests are human), and is easily grown. Plant the bulbs four to six inches deep in a very sunny spot. You want full sun with this one so the stems will stay stiff and upright.

Shade gardens will produce weak stems that flop over, and there are few sights sadder than a flopped over allium when the flower is too heavy for the stem. If you have to plant more than one of these ornamental onions, plant them at least eight inches apart.

The plant breeders are using A. giganteum to give extra height and flower size to other hybrid bulbs. The best known of these is the cross between A. giganteum and A. stipitatum (native to Afghanistan) sold as ‘Globemaster.’ ‘Globemaster’ has a ten-inch, silvery-violet blossom and will be a hit in any garden.

This is a smaller firm that is well worth growing. I’ve just obtained this one myself from a friend although I’ve admired it for many years in other people’s gardens.

A. moly is bright yellow and about ten inches tall. It begins blooming at the end of May to early June in local gardens, and if planted in the full sun and 3 inches deep, it will live happily in your garden for years.

In fact, if happy, it will not only live where you plant it; it will live just about anywhere you don’t want to weed it out of. (which accounts for why I haven’t grown it before in my garden) This is a bit of a spreader, so do plan on weeding it out after a few years (I am).

Suppose you can find the cultivar ‘Jeannine’ purchase this because it has two flowering stems on each stalk rather than the single of the species. You’ll get twice the blooms and twice the seeds. This native of Southern Europe should be planted four inches apart.

Plant about six in a small clump to get you started – after that, move them around your garden or allow them to self sow to give a cheerful yellow show after the tulips are finishing.

There are two other Alliums you’ll often see in garden centers.

4. A. Neapolitanum is a cheerful little bulb producing glistening star-shaped flowers held on 15-inch stems (give or take a few inches). The nodding buds open up to upward-facing, glistening white flowers with yellow anthers. This is a bulb of the dry, open sunny spaces in Portugal and the Mediterranean.

Do not put it in clay soils and do not grow it where it will get much summer moisture. Moist soils in the summer will simply kill it; it wants full, hot sun and baking, well-drained soils with no clay. While the flowers have a pleasant fragrance to them, as a native of southern climates, they can be a bit miffy in colder climates. Many gardeners do find, however, that they make excellent forcing bulbs.

5. A. Karataviense. This strapped leaf-shaped plant is well worth a place of honor in any rock garden or the front of a sunny perennial border.

The four to six-inch blossom is slightly unexpected at eight inches tall but quite welcome in the early spring garden. There is a range of available colors – from pinks through violets – so grow them all. Plant these ornamental onions three inches deep and three inches apart (you’ll want lots of these) to give you a great show in the spring.

If you’ve never grown them before, you’ll be surprised by the almost lack of flower stem – the flower looks as if it were resting directly on the leaves.

And no, these ornamental onions don’t stink; they just capture your heart. 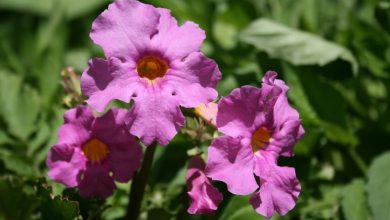