Phlox Paniculata: The Ultimate Guide For Growing Phlox in Pots 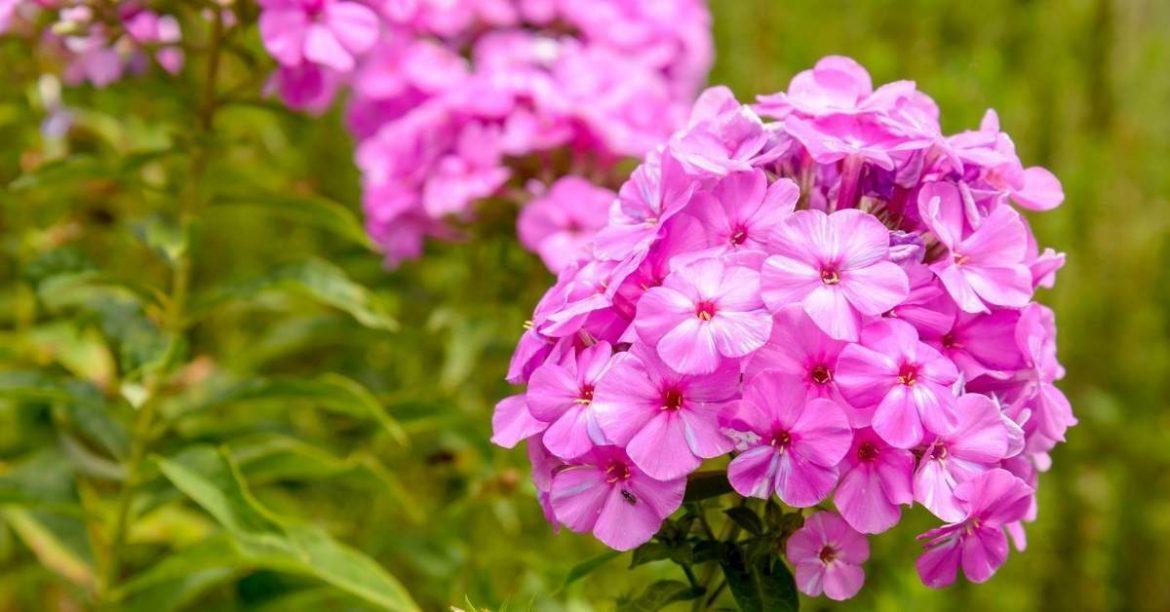 Growing phlox in pots for the primary season summer border is growing a three-season garden backbone plant. This is the kind of plant that flowers for a long time, is a heavy bloomer, and is relatively easy to grow.

Here are all the details you will need to keep this perennial flower growing well for you. Keep reading to learn how to grow phlox in pots, containers, and in your backyard or garden.

Contents hide
1 Origin
2 Blossoms
3 Location: Can Phlox grow in the shade?
4 Soil Requirement?
5 Growing phlox in pots
6 Planting Garden Phlox
7 Propagating Phlox paniculata
8 Care
9 Deadheading
10 Growth: How fast does Phlox grow?
11 Use
12 Diseases and pests
13 FAQ – Phlox
13.1 Where are phlox best planted?
13.2 Can phlox survive winter in a container?
13.3 Does phlox multiply?
13.4 How do you protect phlox in winter?
13.5 How cold can phlox tolerate?
13.6 How do I prune phlox?
13.7 Does phlox go dormant?

Phlox has been cultivated as a garden plant since the 18th century. Breeding from the American wild species Phlox paniculata and crossing with the meadow phlox and wild sweetwilliam (Paniculata maculata) resulted in countless varieties, many of which have found their way into our gardens.

With its bright colors, Phlox paniculata attracts attention from afar. The flowers of the high flame flower shine in white, pink, red, or purple from June to September. Not infrequently, they are also two-colored.

The plate-shaped flowers consist of five similar petals, which are often stronger or contrasting colored at the base and thus form a so-called eye. They are very close together in a cone-shaped inflorescence, so they like to overlap each other.

Especially in warm afternoon and evening hours, they give off a pleasant scent and attract numerous moths for pollination. The fragrance nuances range from sweet aromas such as honey and violets to spicy herbal notes.

Location: Can Phlox grow in the shade?

Phlox paniculata (Garden phlox) wants a full sun location or at the least a part sunspot. It will tolerate part shade but will get leggy if you don’t give it enough sun. If you have a choice, I’d recommend you put it in the morning sun so dew will be dried off the leaves as soon as possible.

I would also put it in a well-ventilated spot in the garden (your windy location).

Because this plant does get powdery mildew with a vengeance if allowed to stay damp and shady. It is the main weakness of the plant. While a few “resistant” varieties are on the market, they are scant improvements over the primary selection unless given excellent growing conditions.

Growing phlox in pots, in your backyard or garden is simple on a wide variety of garden soils, including a heavier, almost-clay soil. If you have sandy soils, you simply have to water more to keep the blossoms coming (allowing any plant to dry out will reduce the blossom count).

Phlox is an excellent choice for growing in a container. For the spiller duty in container gardens, creeping cultivars are a great option to consider using. Although tall phlox may play a part in the thriller, their height could prevent them from being employed in anything but the largest containers.

To grow phlox in pots, make sure the container you’re using has at least one hole in the bottom for drainage. It is important to provide at least 6 inches of space between each plant to allow the creeping phlox to spread out. If the potting mix doesn’t already have fertilizer included, you should add a little bit of an all-purpose fertilizer to it.

Choose the planting hole so that the high-flame flower is not pressurized by neighboring plants, and the leaves can dry off easily. Mix some compost into the excavated earth and water the young plant well.

For Phlox paniculata to thrive, it is divided after five to eight years and planted in a new location. To prevent powdery mildew or stem nematode infestation, you should not plant a phlox in the original place of growth for the next six years.

Getting more is as simple as digging up a chunk of the root in the spring and moving it. Do this before or just as active growth starts. Fall division is also a recommended practice, and I have moved quite a few of them this way. See the pages on plant division for details on how to do this.

Fall care is simply to cut the plant to the ground. Leave a few 6-inch long stubs so you know where the plant is in the spring. Generally, remove the stems and leaves from this plant to your landfill – do not compost them in your own garden. The stems and leaves will be full of powdery mildew spores.

Deadheading will not prolong the bloom because the plant blooms in the middle to late summer. However, deadheading will improve the appearance of the plant as well as the surviving flowers. As a result, get rid of any wasted or fading flower heads.

Simply cut them back enough that the stems that supported them are no longer visible without destroying any additional flowers.

Growth: How fast does Phlox grow?

Phlox will start as a tiny gallon plant and grow to 12-gallon plants in the second year. It slows down a little after that but finally takes up an 18-24 inches broad area.

You’ll need to plant multiple specimens 12-18 inches apart to achieve the full “blowsy” appearance shown in garden publications. You may leave it in one location for 4-5 years to bring it up to 30 inches broad. After that, you’ll want to divide it to enhance the blooms and breathe fresh life into it.

The multi-colored varieties of Phlox paniculata are among the most important magnificent perennials for sunny borders. Due to their bright colors and the rich, long-lasting bloom. Depending on the flower color, there are different companions.

You can loosen up the arrangement with ornamental grasses such as Feather Reed Grass (Calamagrostis), Switchgrass (Panicum virgatum), Fountain Grass (Pennisetum alopecuroides), or Silvergrass (Miscanthus). Phlox paniculata is also very suitable as a cut flower for the vase and adorns summery bouquets.

The main pests of Phlox paniculata are powdery mildew, leafhoppers, and stem elk. The risk of a fungal attack can be reduced by paying attention to an optimal location and vigorously watering the plants in hot spells.

If powdery mildew has already attacked the high flame, you can treat the plant with environmentally-friendly network sulfur. The best way to remove the leafhoppers is with a jet of water from the garden hose.

The insect likes to sit hidden in a drop of foam on the leaf and suckle on the plant. The small stem, a slender, almost transparent nematode, attaches itself to the shoots of the phlox. It is best to cut off and destroy infected shoots immediately.

Growing phlox in a full sun perennial cottage garden is almost a necessity. Just pick the newer disease-resistant varieties that are coming onto the market now.

Where are phlox best planted?

Phlox should be grown in a position that gets full sun or light shade in soil that is wet but has good drainage. The front of a border is the best place for shorter kinds, while the rear and center may accommodate taller cultivars.

Can phlox survive winter in a container?

Definitely yes. In point of fact, containing the powerful spreading tendencies of creeping phlox (Phlox subulata) by placing it in a container is an excellent approach to do so. This fast-growing plant will quickly cover a container or hanging basket with blooms of various colors, including pink, white, and purple, which will cascade over the edge of the container.

Yes. Phlox plant division should be performed once every two to four years, either in the spring or the autumn. Phlox plants should be divided when they begin producing fewer or no flowers at all since this indicates that it is time to do so. In a similar vein, if the leaf on phlox begins to thin down, it is likely time to divide the plant.

How do you protect phlox in winter?

Following the occurrence of the first frost, the stems should be trimmed down to the soil line. Before the ground becomes frozen, spread a layer of mulch about two inches thick on top of the plants. This will protect the roots from a freeze-thaw cycle, which may be detrimental, and it will keep the moisture in the ground.

How cold can phlox tolerate?

In their respective growth zones, creeping phlox plants can withstand a considerable amount of cold and heat. They are also able to withstand a certain amount of frost, although extended exposure to temperatures lower than 40 degrees Fahrenheit may be harmful to the plants. They are heat tolerant.

How do I prune phlox?

After the stems and leaves of the phlox have been destroyed by the fall frost, you can prune the plant. Reduce the height of the stems to within two or three inches of the ground. If the plant has to be divided in the spring, you will have an easier time locating it using this method and avoiding treading on any new growth.

Yes. The phlox plant will turn yellow and start the process of falling dormant when it has finished blooming in late August. You will see some green in the plant’s crown; this indicates that the plant is still alive but in a dormant state. This is the correct order of events and procedures.