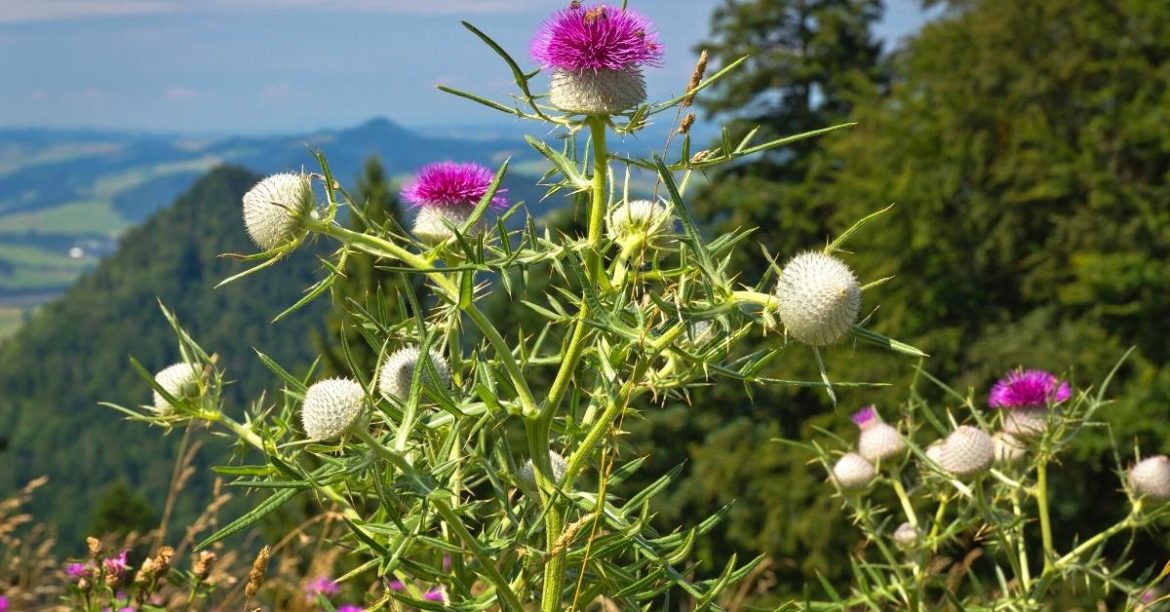 By late Fall, a Scotch thistle has matured to an impressive rosette of white and woolly foliage. The spines aren’t showy, and your first encounter with them is usually by painful surprise. After that first needling, you’ll approach Onopordum warily.

In a mild climate, the Fall rosette would keep growing all through the Winter. The leaves grow as much by expansion—filling of already-formed cells with water—as by the formation of additional cells.

And so in climates where winter weather can be below-freezing, a growing leaf’s enlargement eventually raises its water content to the point where the cells freeze and the leaf is destroyed. The water content of the very newest foliage is low enough that it survives the cold.

With the return of warm weather, the plant can last continue in its life cycle unabated. The basal foliage is no longer at risk of being destroyed by freezing, so it is at last able to luxuriate to full dimension. The plant also sends up a huge leafy stem that produces the flowers.

Leaf and stem, every square millimeter is felted in the woolly white hairs, and every edge is armed with the needle-sharp spines.

The buds open to tight clusters of tiny lavender flowers.

A hundred or so of the minute flowers crowd together above the swollen prickly base—the involucre—making a soft and delicious landing pad for any number of pollinators.

Scores of flowers open over a month or so in the thistle’s mid-Summer flowering season. In the picture below, one of my latest roses, Sander’s White, is in bloom against the carriage house, so it must be late June or even early July. The thistle is only just starting into bloom.

It’s a big show, but not a long one; the thistle has died and set seed by August. If you’ve been diligent in controlling self-seeding—see “How to handle it” below—by December, all that remains will be two or three newly-sprouted rosettes, like the one in the top picture.

Here’s how to grow this unusual biennial:

The first full season: A large basal rosette. In the second season, the rosette grows a gigantic vertical flowering spike.

its habit: The first-year rosettes are as remarkable as the second-year bloom spike.

Every surface is aluminum-white with dense, soft hairs; the innumerable thorns are scarcely visible or colorful, which makes them all the more painful.

Its imperviousness:  Onopordum is untouchable by browsers or humans.

The steely white foliage has an under-color of slate blue, and the flower heads are lavender, making Onopordum a peerless friend to pink, blue, white, and burgundy. To my eye, even if the rosettes are disbudded—see “How to handle it” below—the foliage still seems more friendly to pink than to either yellow or red.

For white-woolly foliage that partners with hot colors, grow Verbascum bombyciferum cultivars such as ‘Polar Summer’ or ‘Arctic Summer,’ whose flowers are yellow and whose foliage is underlaid with yellow-green.

The painful challenge of weeding anywhere near Onopordum rosettes inspires strategic thinking about groundcovers. Because the rosette’s large leaves will smother anything smaller and within reach, partner groundcovers need to be carpeting instead of clumping, so the colony can, literally, give ground as needed as the rosette expands then regrow when it dies.

But because Onopordum carries on from one generation to the next only by seed, it might not be able to self-sow amid a really thick groundcover, which, for a time, would be able to shade out the young Onopordum seedlings. See “How to handle it” below.

Carpeting groundcovers that also enjoy sun and soil that’s well-drained and even dry include hardy plumbago, Ceratostigma plumbaginoides, and any of the groundcover sedums, such as the purple-leaved ‘Vera Jamison.’ It either moves quickly enough to ebb and flows with the Onopordum rosettes.

An Onopordum in bloom always brings the disruptive energy of an eruption—which is, indeed, just what it is. It’s difficult to have taller plants growing nearby; they’re liable to look muscled aside or even mugged.

Plus, the blooming structure of an Onopordum is so architectural, with visual integrity right to the ground, that there’s no need to worry about hiding the bare ankles, shins, and knees that so often plague other tall perennials and ornamental grasses.

All in all, then, Onopordum is at its best in solitary splendor. All the better if you can back it at a safe distance with dark evergreens or a clipped hedge. If you’ve got yards and yards more dry-laid terrace or walkway than you need, you could establish a mighty grove of Onopordum in the interstices.

The juxtaposition of uncompromising stone with the foliage rosettes is one of the strongest and most memorable any garden can achieve.

Where to use it in your garden

Onopordum is always focal. Site it where you want everyone’s eyes to be drawn. The plant’s appealing woolly surface, beautiful flowers, and monstrous size—let alone the necessity of regular access for deadheading (see “How to handle it” below)—dictate positioning near walkways or at the front of beds.

Prune side branches of the bloom structure as needed to maintain sufficient, safe passage along adjacent walkway or lawn. But Onopordum is such a tour de force that it would be well worth creating a prominent stretch of extra terrace or walkway or gravel just so there’s room for a telling group.

Full sun and almost any soil that’s reasonably well-drained, especially in the Winter.  Onopordum is completely comfortable in dry and very lean soils, too.

How to handle it: The Basics

Onopordum propagates only by seed. In the Fall, scatter the seeds over prepared soil in full sun; it isn’t necessary to cover them. If Fall is long or your Winter is mild, the seeds may germinate right then; if not, they’ll come along in Spring. Thin the seedlings to two or even three feet apart.

In the first full season of growth, the plant forms a large—sometimes surprisingly so—rosette of leaves. They’re thrilling in their woolly whiteness and exquisitely painful if you try to weed around them with bare hands.

In the second and final season, the plant sends up a single titanic flowering stem.  Onopordum stems are self-supporting, thank goodness because most attempts to interact with the plant are painful. The large lavender flower heads emerge from every branch tip, sometimes in small groups.

Working carefully and with concentration to avoid getting pricked, go over a blooming plant a couple of times a week to clip off flowerheads that have matured. The plant looks better when groomed, and the heads you clip off can’t progress to seeds.

As the flowering cycle nears completion, the entire plant begins to look shabby. Sooner rather than later, approach the plant wearing a heavy long-sleeved shirt and leather gloves and with loppers in hand. Cut off side branches from the bloom stalk so you can grab the stalk more easily and less painfully.

The entire plant, roots and all, will lift out of the ground with poignant ease; the mighty and invincible thistle has become a paper tiger in old age. Harvest any seed heads that may remain, and then you can put all the stems onto the brush pile. Either dispose of the heads securely so they don’t germinate or save one or two for their seeds.

How to handle it – Additional

You could sidestep the entire danger of self-seeding by cutting off the bloom spike the moment you see it. This may also convince the basal rosette to flourish for a second or even third season.

Onopordum acanthium is an aggressive and dangerous weed in dry climates such as the American West and Australia, lacking some herbivorous insects that keep Onopordum more in control in its native Europe. Even in a supremely wet climate such as that of Scotland, Onopordum can become too much of a good thing.

It’s the national flower of Scotland because a beach on which one invading army or another landed, way back when, was bordered by thick stands of Onopordum. They proved impenetrable to man or beast, and the army retreated.

Onopordum is only modestly successful at self-seeding in my heavy and poorly-draining soil. In better draining gardens, especially those in drier climates, deadhead Onopordum without fail, letting only one or two seed heads mature.

You could also consider harvesting those heads before they shatter, and germinating the seeds in pots, so you can be sure of controlling the number of offspring.

An Onopordum that in July is the size of a restaurant refrigerator leaves an empty space that same size in August, September, and October. But the plant’s stunning architecture and scale demand space and freedom from competing for horticulture, making a late-Summer second act for that same space all the more problematic.

It’s not as if you can fill such a huge gap by fluffing up an adjacent colony of helianthus or dahlias. One option would be to drag over a big container that you’ve been careful to plant with species that are at their best from August until frost.

If your Onopordum was growing amid a carpeting groundcover, you might also be able to ease its flexible stems over the bare spot as a bit of horticultural comb-over.

There are about forty species of Onopordum, all native to Europe and the Mediterranean. That most behave as well as look like weeds make the ones that—handled appropriately—are ornamental all more counter-intuitive and welcome.

The rosette of O. acaulon is flat—prostrate, even—and the flower stalk is shortened so severely that the flowers are grouped tightly together at the center of the rosette-like a flat corsage. Extraordinary.  O. nervosum is similar in scale to O. acanthium but is usually narrower.

Other garden-worthy thistles are in the Cirsium, Silybum, and Carduus genera—as are many other awful weeds. Choose carefully, and deadhead faithfully. Silybum marianum should be grown both for its white-marbled foliage as its odd name.

Cirsium muticum is native to eastern North America and, unusual for any thistle, is at home in moist or even wet soil. As with Silybum, the name alone is enticing: Swamp thistle.

Onopordum acanthium is native to Europe, from Spain to Scandinavia, and east to Kazakhstan.