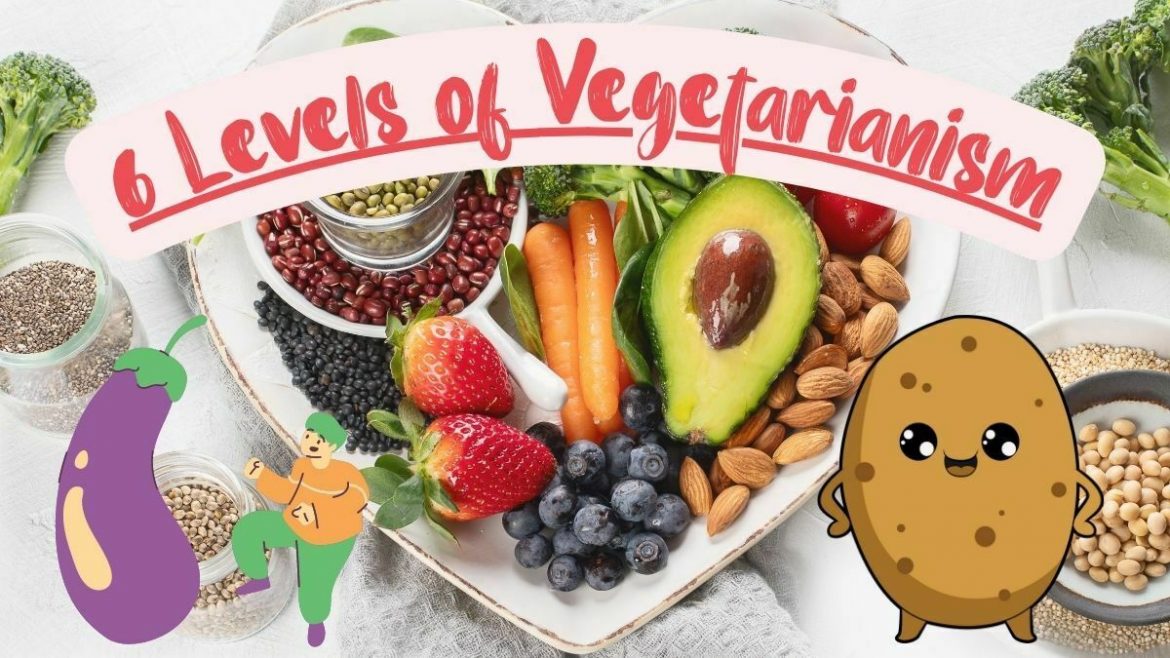 6 Levels of Vegetarianism Quick Guide: How to Categorise Vegetarian

There are different explanations for different 6 levels of vegetarianism, or different types of diets vegetarians do follow. Here I wanted to explain the difference I understand from my point of view of those Latin-like terms of vegetarianism. If you like to add something or oppose it, you can for sure explain it by your comment.

Let’s take a brief look below at the types and levels of vegetarianism:

These types of vegetarians are the ones that will choose not to eat any kind of meat or animal flesh other than fish. Although the term isn’t used very often, there are many people who are choosing to adopt this type of vegetarian diet. Normally they do so because of health issues or before they decide to move on to become a full-fledged vegetarian.

This is the kind of person who mainly chooses to follow a vegetarian diet but will occasionally choose to eat meat.

Most people, when they hear the term vegetarian, will, of course, think of someone who doesn’t eat animal flesh of any kind, including fish. However, these people do continue to eat eggs and dairy products. In fact, what these people are referred to as is being a Lacto-Ovo vegetarian.

You might also want to see this: (Vegetarian) Best smoked corn on the cob recipe

The levels of vegetarianism don’t end here, but this is the strictest of all diets that vegetarians will follow. These are the kind of people who will not eat any kind of meat or fish and will not consume eggs or dairy products. Furthermore, they won’t eat any processed foods because they are likely to contain ingredients derived from animals.

Such people will only eat foods that have been unprocessed, meaning that they haven’t been heated above 115 degrees Fahrenheit. The people who follow this particular diet believe that when food has been cooked above this temperature, it loses a large amount of the nutrients contained within it and so is harmful to their bodies.

This is considered by some to be the healthiest of all vegetarian diets one can follow. It requires eating unprocessed vegan foods such as fruits, vegetables, and whole grains. However, unlike other vegetarian diets mentioned above, it allows the follower to eat fish occasionally. They do, however, avoid the consumption of sugars and refined oils. Also, when following this diet, there is a lot of emphases placed on eating Asian vegetables such as sea vegetables (seaweed) and daikon.

These are what I think about vegetarianism. If you agree with them or like to add more, share your comments with us.

No. It is hard to be completely vegan for a number of reasons, one of which is that plants get the nutrients they need from the soil, which is partially formed of animal remains that have decomposed.

What is a Level 1 vegan?

Level 1 vegans may be aware of veganism’s ethical and environmental advantages, but it is not what drives or motivates them to become vegan. Level 1 vegans will, for the most part, steer clear of items that come from animals, although they are more inclined to make exceptions on occasion for things like honey or milk chocolate.

What is a Level 3 vegan?

Level three vegans are your classic “hardcore” proponents who are entirely devoted to veganism. These vegans adhere to all tenets of the vegan lifestyle. They are used to leading a plant-based lifestyle and do not believe they have to make sacrifices in terms of the foods they eat.

What is a flexitarian diet?

The term “flexitarian” comes from a combination of the terms “flexible” and “vegetarian,” which describes the diet in its most basic form. It’s a combination of strict vegetarianism and veganism, with the exception that occasional consumption of animal products is permitted. The ins and outs of this eating pattern are broken down by registered dietitian Kate Patton, who has the degrees of MEd, RD, CSSD, and LD.

What is higher than a vegan?

As a subset of both veganism and raw veganism, fruitarianism is a more stringent diet than either veganism or raw veganism. If one follows this diet for an extended length of time, they risk developing serious nutritional deficiencies; consequently, many fruitarians choose nutritional tests and vitamin injections to mitigate this risk.

Yes. Vegans can drive vehicles. The Vegan Society defines veganism as “a way of life which tries to exclude—as far as is feasible and practicable—all kinds of exploitation of, and cruelty to, animals.” This definition of veganism can be found in the Vegan Society’s manifesto.

Do vegans use glue?

The vast majority of adhesives used in modern times are animal-free: The vast majority of adhesives that can be purchased in stores do not include any animal products. All types of glue, from Elmer’s to Gorilla Glue, Krazy glue to epoxy, and pretty much everything in between, are created synthetically and do not include any animal byproducts. I’ll go into further depth below.

The word “cheating vegan” is shortened to “chegan,” which is pronounced, “chee-gen.” The misspelling “cheagan” is rather prevalent for this term. Someone who eats vegan almost all the time but sometimes deviates from their diet, most often when they are in the vicinity of pizza or ice cream, is the person Chegan refers to.