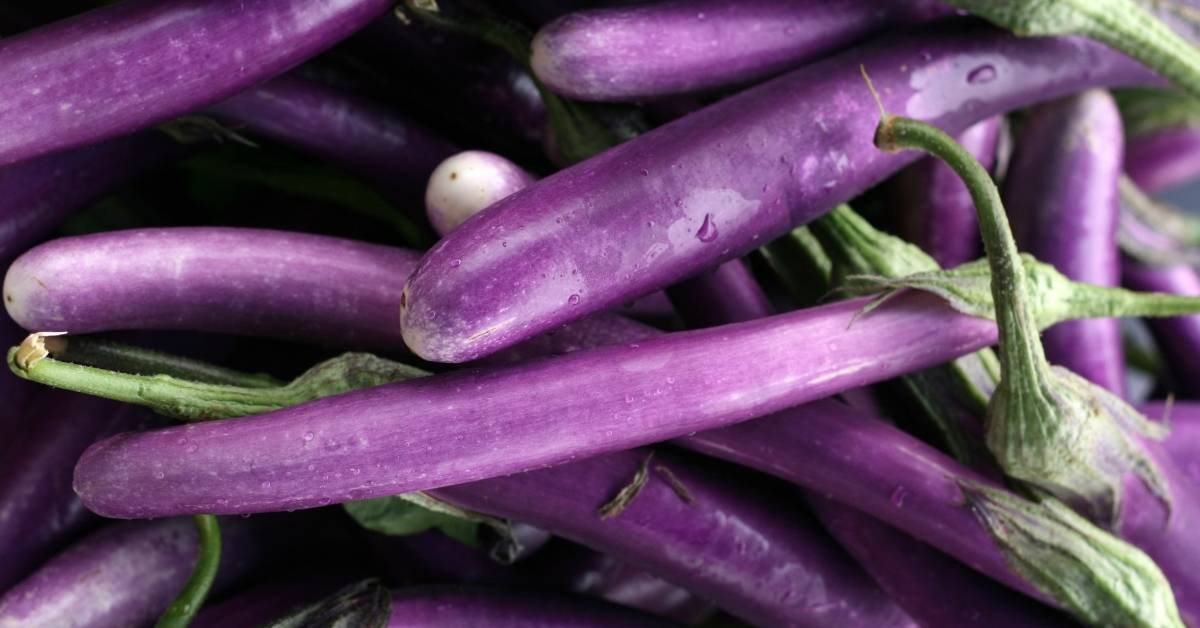 Japanese eggplant is a bit different than other common eggplant varieties. It is considerably smaller, thinner, longer, and much more tender. It is a striking purple-black color that is equally attractive in the garden as it is tasty in many dishes.

Here is some useful information on how to grow and when to harvest Japanese eggplants in your home garden.

Japanese eggplant is becoming quite popular with gardeners due to its much smaller size and the fact that it can be grown from seed. Also, contrary to popular belief, you should know that it is a fruit, not a vegetable.

Original varieties of eggplant are native to Pakistan and India and became domesticated around 4,000 years ago. In 500 B.C., it was introduced to China, where they hybridized their own particular delicious varieties of various colored and shaped fruit.

Between the 9th and 12th centuries, eggplant migrated to Egypt and the Middle East. Once the Spaniards were introduced to it, the plant became famous across Europe. It was called “The Apple of Love” and was believed to be an aphrodisiac. When the Spaniards traveled, they took it with them and introduced it to South America in 1650.

Later, in 1805, Thomas Jefferson was given a plant from a friend in France, and that is how the plant finally came to be grown in America.

When Is the Best Time to Plant Japanese Eggplant?

Japanese eggplants are a warm-season crop that cannot withstand frost or freezing conditions; they must be grown in warm soil with at least 75 degrees Fahrenheit daily. Because eggplants have a long growing season, you’ll want to start them indoors approximately eight weeks before the last frost date in your area.

How To Grow Japanese Eggplant

To grow Japanese eggplant at home, you will need seeds, soil, containers, compost, fertilizer, mulch straw, and manure. You want to start your Japanese eggplant growing indoors about six weeks before the estimated last frost date.

When to harvest Japanese Eggplants?

Your plants will be ready to harvest between 65 and 80 days. You will know that they are ready when they reach the desired size and color. A ripe Japanese eggplant will offer dark, glossy skin. They will continue to produce usually until the first frost.

Eggplants are ready to harvest when the skin is glossy and free of stains, regardless of variety. It easily yields to the touch of a finger. The color of eggplant varies depending on the type. It comes in a variety of colors, including dark purple, white, and green.

The eggplant’s inside must be pale, nearly white. If the fruit is green, that means it was picked too soon. The deadly solanine level of the aubergine is then too high, and it should not be ingested. The eggplant is overripe and bitter if the flesh is already browned.

How to store eggplants?

It is best to process eggplants directly.

Eggplants lose their crispness relatively quickly after being harvested, but they can be kept for two or three days without any problems. After that, they usually get a little wrinkled and no longer look fresh, but they can still be processed. Since they love warmth, it is better not to put them in the refrigerator.

Try to keep them separate from apples and tomatoes. The gas ethylene, which both of them emit when they ripen, spoils the aubergines more quickly.

What’s the Difference Between a Globe and a Japanese Eggplant?

Globe eggplants have thick and robust skin that chefs usually remove before cooking. Japanese eggplants, on the other hand, have delicate, thin skin that does not require peeling, making them simpler to consume.

How To Tell If A Japanese Eggplant Is Spoiled

Japanese eggplant and all other varieties are known to spoil quickly. This not only compromises the taste but the nutritional value as well. If you know the difference between a spoiled or fresh eggplant, it can literally make or break your meal.