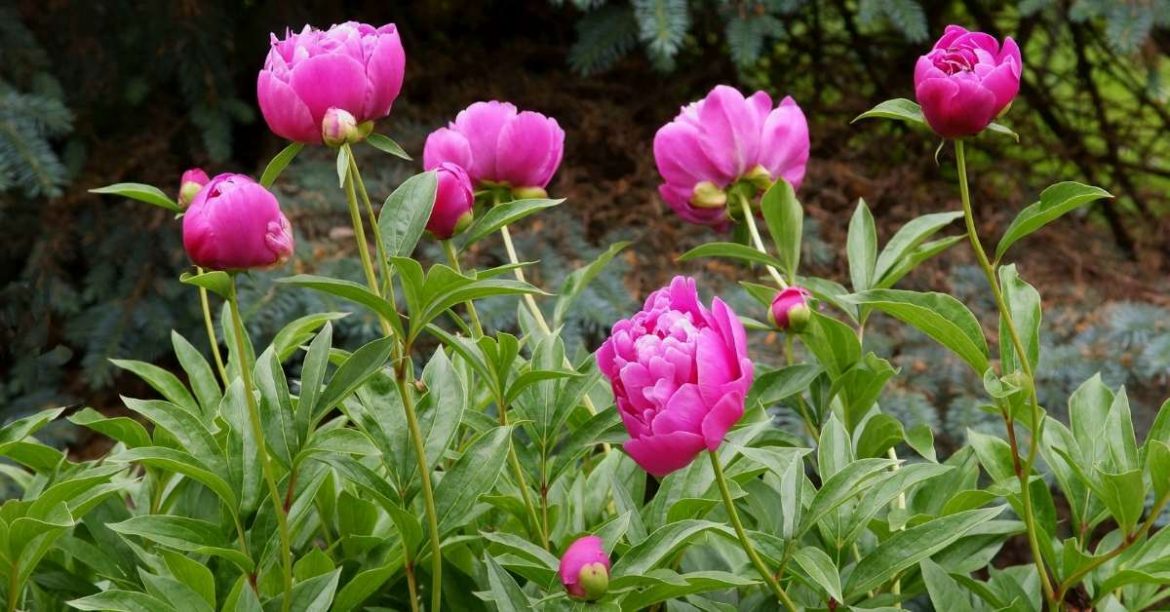 One of the loveliest early summer blooms in my garden is the peonies. This is a historically rich and easy-to-grow plant, one that deserves a home in every modern garden. Here is growing great peonies and other information about the plant.

The name is said to be in memory of Paeon, the physician to the gods, because he reputedly discovered the plant’s medicinal properties. Another sense of the antiquity of this plant is told by the reference to today’s signing of a hymn or Paeon (a song of praise) – the Paeon was initially a hymn to Apollo.

There is also the reference to the Greek word “paio,” which means “I strike,” referring to the incantation by old-time physicians.

However we source the name for this plant, we go backward in time quite a ways to find them in all the severe gardens of Greece and Rome. One old legend has it that one counted the blooms of all the peonies in the garden, and if the resulting number were an odd number, then death would come to that house within the year.

Mind you, I’m told that most of the counting was done after the fact – to prove that the peony was right. Nobody counted ahead of time because they didn’t want to court the Prince of Death.

The herbaceous or Chinese plant (most of the family is native to temperate Asia, northwest America, China, and Europe) is a long-lived plant.

Once planted, they can live for generations with no further care. One of my favorites is one I received as a division from a local churchyard. It had been planted there about 90 years ago on the wedding day of a friend’s ancestor. Bright red, it still graces the front of the church as well as occupying a special spot in my garden.

How To Grow Peonies

I planted it in full sunshine and rich but well-drained soil, and it quickly grew to flowering size. The one thing I do for all my plants ensures they are planted on rich soil, high in compost and organic matter. Because they are going to stay in one place for a very long time, they get the best soil I can provide for them.

When are peonies in season? – Moving and Transplanting

I seldom move them about, but this year because of the enlargement of my garden, I’m going to have to shift most of them. When I do that this fall – they do better with a September move than early spring – I’ll dig them as carefully as I can because the large roots are brittle and break easily.

I’ll take as much soil with them as possible, and I’ll water them generously both before and after the move. This way, I may only lose one season’s bloom;

I’ve known some of these plants to sulk for several years after a move.

The Most Important Thing About Planting

The one thing I will do is ensure the growing tips or “eyes” are not buried more than 1/2 inch deep in the soil. Deeper than that and the plant will grow vigorously but never bloom.

The tree peonies prefer the same conditions as their herbaceous cousins, except they prefer more alkaline soil.

The graft on these plants should be buried at least 3 to 4 inches deep, and in cold climates like my USDA zone 4 gardens, they can be planted even deeper. Mine is probably 9 inches deep, as I’m hoping they will move onto their roots instead of the graft.

Mine tend to die almost to the ground most cold winters but resprout and grow several feet tall as well as bloom in one season. See above for planting to achieve this.

Here are two tips you should know: The flowers on many cultivars flop over, so I straightened a wire coathanger and wrapped it around the plant about 2/3 of the way up the foliage. With the hooked ends adjusted to the right length, the wire holds the plant upright without the use of a stake.

The wire is also invisible. In the fall, simply unhook the wire and clean up the foliage.

The second thing you should know is that the only severe disease you’ll likely see is peony gray mold blight (a form of botrytis) which causes the flower buds to go soft, wilt, and turn gray. The solution to this is good air circulation, plenty of sunshine, and good plant hygiene in removing spent flowers and stalks. If it persists, the use of a fungicide such as lime-sulfur will help control it.

And no, ants aren’t necessary for the blossoms to open; neither do they hurt the plant. They’re there because of the sweet sugar exuded by the blossom.

Some folks have asked about collecting the seeds. And the answer is yes; you can easily collect peony seed. Treat it like any other perennial seed (see articles on this site about germinating seed) but do understand that it takes several years to see a plant.

The first year, the seed doesn’t produce leaves, only roots, so you’ll think it is dead. It is only in the second year that it will start throwing up small leaves. Starting from seed is not for the impatient gardener.