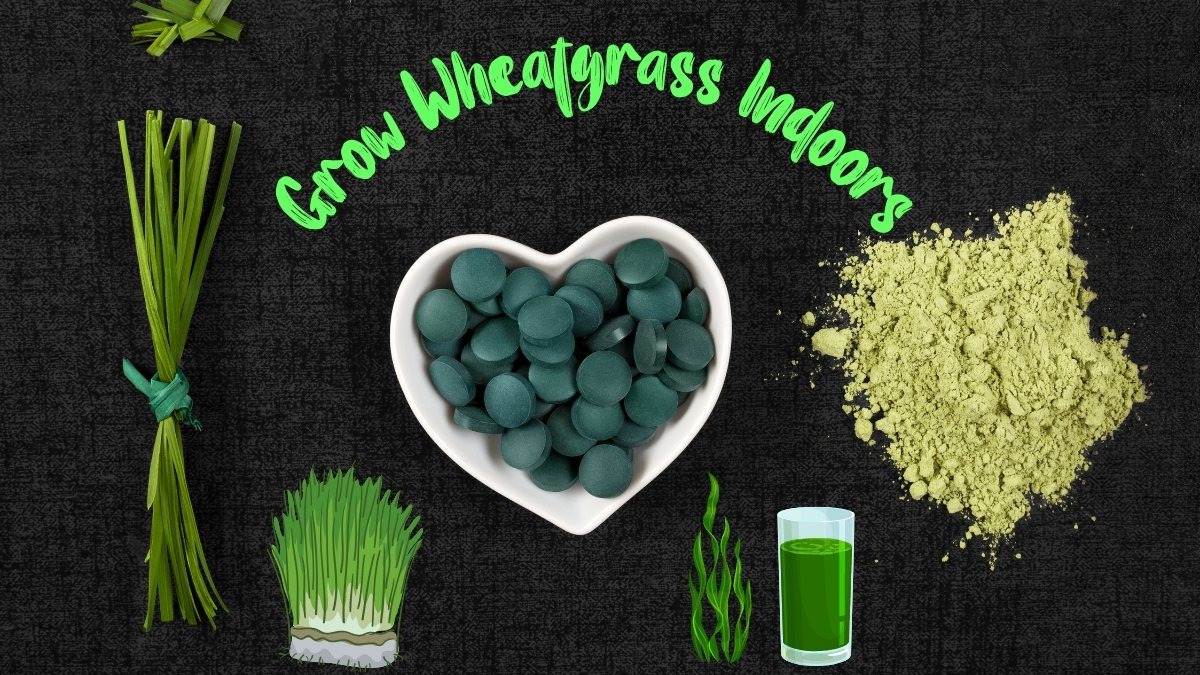 Wheatgrass is one of the most tolerant grains to grow indoors or out. It has so many healthful uses. It’s loaded with vitamins and nutrients most doctors recommend for daily intake. Ann Wigmore, the author of “The Wheatgrass Book,” published in 1985, was a chief proponent of wheatgrass juice to promote good health.

How To Grow Wheatgrass Indoors

Surprisingly, wheatgrass has not become a gardening “must-have.” so far. It’s so easy to propagate wheatgrass. It’s one of the low-maintenance plants for indoor or outdoor gardeners. Indoors, fully ripened wheatgrass creates a great rustic look that’s so popular in many homes today.

In a nutshell, what are the health benefits of wheatgrass?

Wheatgrass is loaded with a potent mix of nutrients, and as a result, it may greatly benefit your health. It is sometimes referred to as “total nutrition” due to the various therapeutic effects it offers.

Wheatgrass may be an excellent option for improving your health since it contains a wide variety of vitamins and minerals in concentrated amounts. Wheatgrass has characteristics that make it effective against inflammation, germs, and free radicals.

It’s high in Vitamins A, B-complex, C, E, I, and K iron, calcium, enzymes, magnesium, phytonutrients, 17 amino acids. It’s a major source of chlorophyll and helps increase red blood cells in the body. Study the health benefits of wheatgrass to understand the difference in growing methods that increase these benefits.

Basically, live wheatgrass is a better source of nutrients than dried seeds. However, many health-conscious individuals prefer wheatgrass sprouts added to their salads. The bright green wheatgrass stalks also add a lot of nutritious color to salads. Today, many healthful stores carry wheatgrass in supplement form.

However, this is not necessarily as high in quality as freshly grown wheatgrass. A handful of seeds will produce enough wheatgrass for several ounces of wheatgrass juice. The wheatgrass juice has many healthful properties that benefit the heart and mental acuity. Some users claim a reduction in arthritic pain.

Where to Buy Wheatgrass?

There are several sources for where to buy wheatgrass seeds. They can be purchased online. Often, grocery and health food stores carry them in smaller quantities. Check with a garden center that supplies various grains to rural farmers for larger quantities.

Learning how to grow your own wheatgrass indoors is relatively easy. It grows in virtually any type of container. The larger the container you select, the more wheatgrass you can grow. Most indoor wheatgrass gardeners prefer a long tray. Wheatgrass, like mung beans and barley, grows from seeds.

Begin by rinsing the seeds in a colander or fine mesh strainer. Drain thoroughly. Place the moistened seeds in a bowl. Add water. The ratio is three cups of water to one cup of seeds. Cover with plastic wrap to germinate the seeds. Allow the seeds to soak overnight. Repeat the process until the seeds have been soaked a total of three times. By the end of the third soak, tiny white sprouts appear. The seeds are ready to be planted in potting soil.

Grow Your Own Wheatgrass

Growing wheatgrass at home is fairly simple and easy. Once the seeds have been soaked, and sprouts appear, it’s basically up to the indoor gardener to decide how far along they want the growing process to continue. Some gardeners prefer to use mainly the sprouts.

Other gardeners like the idea of allowing the stalks to split and grow to about six inches before harvesting for juice. This stage takes only approximately ten days. If the stalks are cut an inch from the base, a second crop will continue from the first. Generally, wheatgrass will provide two to three viable crops with this method.

Wheatgrass can also be allowed to grow to full maturity and return to seed to create the next crop of wheatgrass plants. This can save on the cost of purchasing more wheatgrass seeds.

After the last crop has been harvested from the tray, consider replacing the potting soil to give the new crop a fresh start. Potting soil can become depleted from multiple harvests that decrease soil nutrients required to produce a wheatgrass crop.

In addition to the method of germinating wheatgrass seeds by soaking and then planting them in potting soil in trays, another technique that works well is to grow wheatgrass hydroponically. Growing wheatgrass in water rather than soil is similar to how alfalfa and soybeans are grown.

Another Growing Method to Try

There’s one other method of growing wheatgrass that is fairly simple. Purchase a length of cheesecloth that fits neatly into a seed tray. Most fabric stores carry cheesecloth, as do several department stores that sell cookware and baking tools. Before lining the tray, soak the cheesecloth and place it in the seed tray.

Soak the wheatgrass seeds with the soil and hydroponic methods. Cover lightly with more cheesecloth and place on a warm, not sunny windowsill or a table. It will take about a week for sprouts to appear beneath the cheesecloth. Check occasionally to ensure the bottom layer of cheesecloth doesn’t dry out.

The simple process of germinating, growing, and harvesting wheatgrass makes it a perfect addition to indoor gardens. One of the best benefits is that the gardener has total control over the crop quality. Choose winter wheatgrass seeds for best results. Then, select chemical-free trays to germinate and harvest the seeds.

Look for the best quality, chemical-free sphagnum moss to grow wheatgrass hydroponically. Wheatgrass growing can be a family project and, for children, a great science lesson. It’s so easy to grow. Even a child can do it. There are no harmful chemicals to worry about. When children are part of growing wheatgrass indoors, it’s a great opportunity to focus their attention on good health.

Beautify Your Home or Office with a Wheatgrass Display

Wheatgrass is colorful enough to brighten a home or office. Consider adding it to an indoor herb or vegetable container garden.

When wheatgrass returns to seed, it can be dried and used in dried flower arrangements, wreaths, and decorative swags. To create rustic swag, simply secure a bunch of wheatgrass stalks together with florist wire and add a few sprigs of rosemary, sage, and thyme. Add a pretty, colorful calico bow and hang it over the kitchen entry or on a wall.

Snip off a few sprigs from the swag when dried herbs or wheatgrass are needed for recipes. Dried wheatgrass can be used in many other ways. For example, when it’s ground with a mortar and pestle, it becomes wheat flour that makes muffins, scones, or bread.

Ground wheatgrass can also be used in cookies, cakes, and pie crusts to give these a wheat flavor. These are fairly commonly used for dried wheatgrass. Search for others to get maximum use from your crop of wheatgrass.

A Glass of Wheatgrass Juice a Day

With such high levels of nutrients contained in wheatgrass, a single four-ounce glass of wheatgrass juice a day shows a marked increase in stamina and energy in individuals who choose to add it to their health regimens. After the last Ice Age, deposits of soils containing extraordinarily high minerals in the Midwestern states of the USA, wheatgrass became a staple of farming in this area.

Start Your Own Indoor Wheatgrass Garden and Enjoy Good Health

The cost to start a wheatgrass garden is relatively minimal by comparison to other types of indoor gardens. Here’s all you’ll need to get started:

Wake up with a glass of wheatgrass juice grown in your own indoor garden.

Yes. Wheatgrass has no gluten.

Does wheatgrass regrow after cutting?

When it reaches a height of between 7 and 10 inches, wheatgrass is ready to be harvested. Harvest the grass by cutting it with scissors that are sharp and spotless as near to the surface of the earth as you can get. After that, the wheatgrass will start to recover, but the yield of nutrients from the second harvest will be lower than that of the first harvest.

Yes. Your dog will be able to safely exercise their natural instincts and get what they are searching for if you feed them organic wheatgrass that is produced indoors. This is a terrific method to give your dog what they are looking for.

In addition, many cats take pleasure in chewing on wheatgrass because it provides them with a variety of nutrients and fiber, and also because it is an activity that is both psychologically and physically engaging.

How do you grow wheatgrass for dogs?

No matter for yourself or for your pets, taking wheatgrass seeds and putting them in a container with a thin soil layer is all that is required to grow wheatgrass. Give the seeds some time to germinate and develop into a lush, verdant area of grass that your pet will like. For detailed explanation, you can read how-to guide above.

Which animals can eat wheatgrass?

Wheat grass is often included in the diets of cats, dogs, birds, reptiles, and other small animals because of the positive effects it has on their health.

Wheatgrass is abundant in antioxidants that combat free radicals, such as glutathione and vitamin C, and includes 17 amino acids, including 8 essential ones. Due to its anti-inflammatory qualities, wheatgrass has also been shown in animal experiments to lower cholesterol.

How long does it take wheatgrass to detoxify the body?

Generally, one ounce (30 mL) of freshly squeezed wheatgrass juice is the minimal dose of this superfood advised for an efficient wheatgrass detox lasting at least 72 hours.

1 thought on “How To Grow Wheatgrass Indoors For Health Booster Wheatgrass Juice?”