6 The Hottest Chili Pepper Varieties to Grow in The Pots 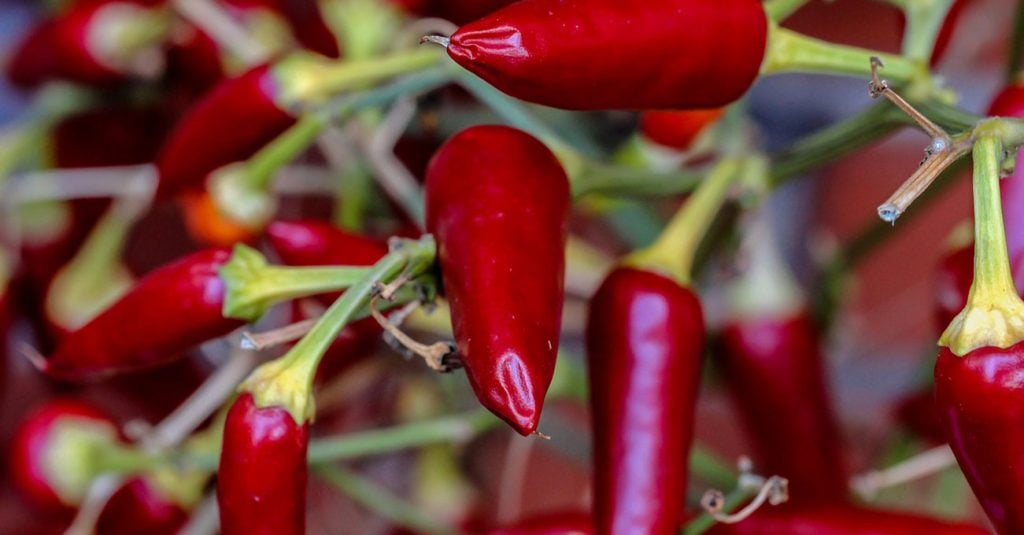 While some people like peppers hot, there are many others who prefer less to no fiery flavor… Whatever your preference, you’ll find your perfect 6 Different Types of Chili Peppers to Grow in The Pots here, right now.

Although peppers are found in many sorts of shapes, sizes, colors, and flavors, hot chilly pepper skins easily reveal themselves and we can divide them into two basic categories; sweet peppers and chili peppers. What makes this distinction is the presence of capsaicin -a neuropeptide releasing agent- in the fruits.

Capsaicin agents and related molecules are what give many peppers that unmistakable fiery flavor; the ones which involve that compound is called ‘hot pepper’ or ‘chili’ pepper, while the rest is called ‘sweet’ or ‘bell’ peppers.

The appearance of Chili peppers can be small and round or longish and slender, which make them vary in many different sizes from tiny to substantial, and shapes cover anything from round to boxy, pointed, or hornlike. However what shape and color they have, has no relation to their level of heat.

That fiery level of chili peppers has become a distinctive part of their attraction. The method to measure the level of fiery is made by a chemical test that was invented more than a century ago. The test measures the concentration of capsaicin, which exposes the Scoville Heat Units (SHUs).

The name comes from Wilbur Scoville, the American pharmacist who invented the test in 1912. When the pepper is rated at zero SHUs, which means it has no capsaicin, it is called sweet pepper, while 500-1000SHUs rated ones are named mild chilies.

The hottest chili pepper in the world | It’s quite hot but perfectly safe!

What is the highest Scoville unit?

Did you know that according to Guinness World Records, the hottest chili pepper in the world recorded is Carolina Reaper, with a rating of an astonishing 2.200.000 SHU (Scoville Heat Units)?
it can be dangerous to eat chilies this hot, even to contact them to the skin of some people. However, here we are not talking about the extreme examples, Just the ones available in the markets for daily usage.

You have progressively more fiery options, with hot measurements. It can be quite painful to eat some types of chili peppers. However, it’s totally safe to consume them (excluding some extreme types).

Back in history, not surprisingly, chili peppers first originated in Mexico, some parts of central and South America, and the Caribbean. And the popularity of those cookery and their expanding culture, they widened all over the world and now we grow our own in our backyards or in the pots.

Today there are many different types of chili peppers to grow, even grafted ones are available on the market.

The hottest types of chili peppers to grow in the pots

If it’s the fiery flavor you’re looking for, you need to go for a variety with higher SHU ratings. If you tend to water and feed relatively less and let them grow in more dry and starved conditions, that will result in a hotter, more aromatized crop, with a smaller size, though.

Just like any other plants, chili peppers happily grow in pots but make sure to keep them out of reach of your children or warn them not to pick them.

Fuego chili pepper is one of the chili options to grow in the pots. It grows tall and earlier. It’s easy to harvest it. Growing it branching, will let you yield more than two dozens of app. 7 inches long and slender chilies that mature from green to red.

Fuego loves growing outside more and it has a medium fiery with 4.000 SHU. its height is approx. 39 inches. But types of chili papers to grow are not limited to these.

Hungarian Hot Wax chili is another easy-to-grow and reliable chili pepper. This pepper variety will produce 5 inches of tapering fruits that mature from a mild green, through yellow to a hotter red. You can consume it raw during the mild green stage as well. Medium. 6,000 SHU. Height of the plant: 39 inches.

Demon Red chili is a compact one with only 14 inches in height. It’s rich in branches, appealing, and effectively productive. Its fruits are narrow, upward-pointing 1½ inches of yields, maturing from bright green to orange then red. Just one of the plants in the pot can produce 350-400 chilies! It’s in the ‘hot’ category with 40,000 SHU.

Prairie Fire is another Neat and compact cayenne pepper plant to grow in the pot, with 8 inches in height. It’s multi-branched and those spreading branches produce more than 60 small (1 inch ) fruits that mature from cream through yellow, orange, and, red.

Very appealing in the pots. This is an alternative to the hottest chili pepper you can grow in the pots. Hot; 75,000 SHU.

Basket of Fire is another well-branched compact plant with 10 inches in height, which gives up to 200 short, pointed, upright 1½ inches of chilies above its greenery. Fruits mature from purple, cream, lemon, rich yellow, orange, and then red. Hot. 80,000 SHU. H: 10in

Caribbean Antillais is tall in height up to 3 feet. Its late-maturing branches give small and wrinkled lime green fruits, which are rather blocky 2½ inches. The fruits mature from orange to bright red. You need to grow them undercover and sow early. It matures well outside in most seasons. Very hot. 250.000 – 350,000 SHU.

How To Start Planning Garden Paths?

6 Vegetables to Plant in October |The USA Planting Guide (Videos)