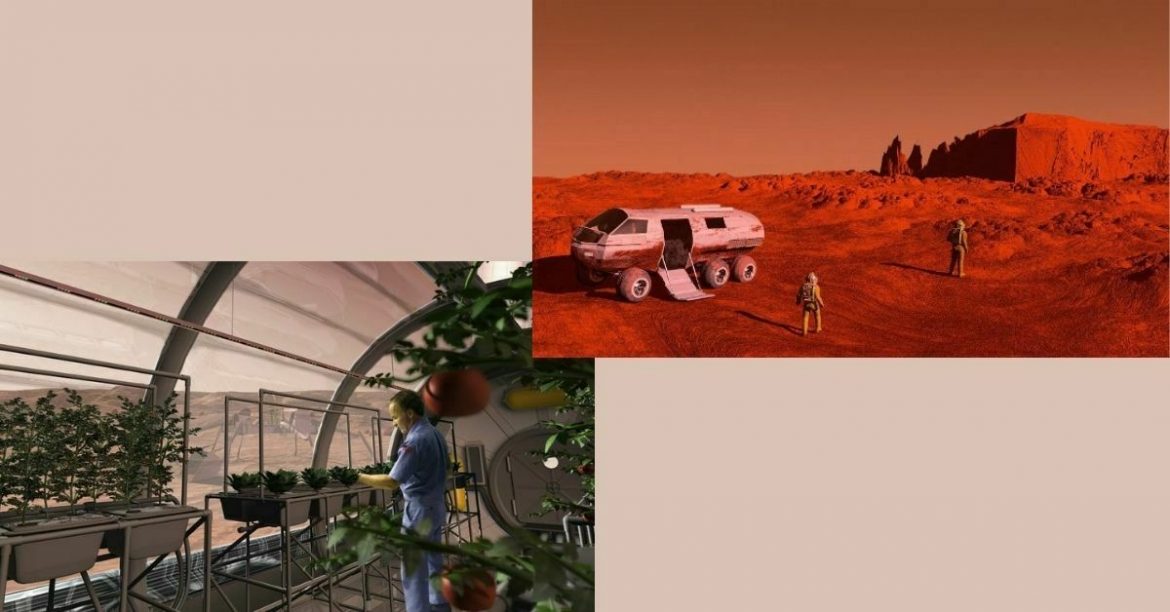 Astronauts need food, water, and oxygen. Plants, and gardening on Mars will therefore be essential companions for a Mars mission.

It sounds like science fiction, but it’s all grounded science. If NASA really does send its first human-crewed flight to Mars, as planned, sometime in 2030, astronauts won’t just carry a primary food supply.

They will probably travel with a greenhouse of sorts to grow plant seeds and seedlings they bring with them. Homegrown soybeans, wheat, lettuce, or other vegetables are critical to the success of their mission.

Plants are true all-rounders. In addition to essential nutrients, they also provide everything else that we humans need to survive: clean water, oxygen, even building materials can be obtained.

“Space farming, i.e. growing plants in space, is crucial if one day we want to venture into space on long-term missions – in other words, become an interplanetary species,” says Grace Crain, an astrobiologist at ETH Zurich.

She is currently conducting research on the European space project Melissa, which aims to develop a regenerative life support system for long-term missions in space.

Because astronauts on Mars missions have a problem: They can’t bring with them the amount of food, vitamins, water, and oxygen they would need for their stay.

And regular supply deliveries are not only far too expensive but rarely possible due to the planetary constellation. So the astronauts have to grow their own food – on site.

Different laws than on Earth

That is easier said than done. After all, different laws apply in space than in earthly fields.

Gravity, for example, is much lower or – as on the International Space Station ISS – almost non-existent. As a result, there is less sunlight for plant growth and no atmosphere to protect against harmful radiation. In addition, there are no soils on Mars that would be suitable for agriculture.

“Any astronaut would have died!”
“Mars contains the salts of perchloric acid, which are toxic to humans,” explains Grace Crain, mentioning the blockbuster “The Martian,” starring Matt Damon.

“Here, the movie, which is otherwise pretty factually accurate, was just wrong. No astronaut would have survived eating vegetables from the Martian soil for that long!”.

So it’s unlikely that giant tractors will one day plow across the Martian soil. “It’s more likely that we Earthlings will first set up greenhouses and create small copies of our Earth’s cycle in them,” says astrobiologist Grace Crain.

The astronauts bring valuable commodities with them: Fecal matter, which acts as a fertilizer—carbon dioxide, which plants need to grow. Bacteria can be used to extract nutrients. The plants grown with it would produce clean water, air, and food from it—the perfect cycle.

A piece of home

The greenhouses would have to be built well protected, in cave systems, for example. There they would be protected from cosmic radiation and meteorite impacts. Solar cells or a small nuclear power plant could provide the necessary energy.

The Mars pioneers would thus have a little piece of home in every respect on the planet millions of miles away.

Is Gardening on Mars posible? Can we soon grow vegetables on Mars?

Earthworms – important helpers in agriculture and horticulture – can also multiply in soil that is modeled on the Earth on Mars. So would horticulture be possible on Mars?

According to Wageningen University, Dutch researchers found two tiny worms at the end of an experiment with the special soil, rocket, and adult earthworms. In the experiment, the biologist Wieger Wamelink actually wanted to observe the rocket’s growth in a substance modeled on the soil from Mars.

The US space agency NASA made the mixture of Hawaiian volcanic material available to the researchers. Then, the scientists put manure and adult earthworms on the Earth.

“The manure obviously stimulated growth,” said Wamelink. “The biggest surprise, however, came towards the end of the experiment when we found two young worms in the simulated Martian soil.”

A sustainable, closed ecosystem is an essential prerequisite for the nutrition and survival of humans on Mars. Worms play an important role here, as they break down dead organic matter and make them reusable. The “Food for Mars and the Moon” project has set itself the goal of building such a sustainable agricultural system.

Since 2013, the researchers have been growing various types of vegetables as part of the project, including green beans, peas, radishes, tomatoes, potatoes, rockets, carrots, and cress. The only species that has so far defied all attempts is spinach.

Here Are The Dangers of Organic Vegetables