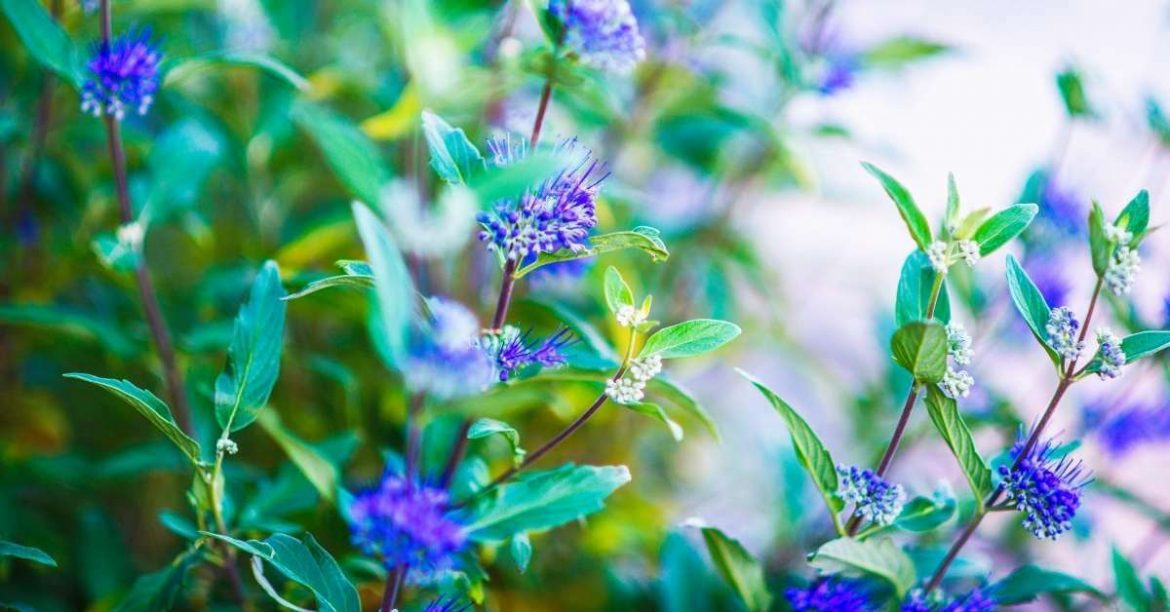 Some folks who live in warmer climates than my zone 5 are into growing Caryopteris Blue Mist (also called Blue spirea, Blue-mist, or even Bluebeard plant) as a shrub, but I’ve tended to grow it as a perennial.

While it is only hardy to USDA zone 7, in my garden, this plant dies to the ground in the winter and springs back up in the summer to give me wonderful fall blooms.

I treat it as a perennial plant rather than a shrub.

How to plant Caryoptesis Blue Mist?

If you decide to try it, plant it in the full sun, in well-drained soil with decent fertility. Plan on mulching it in the fall to give the roots a bit of winter protection as in winter as we’ve just had, the lack of snow cover combined with up-and-down temperatures will likely kill it off.

Having said that, I can imagine that mine will have trouble with its fall transplanting and temporary quarters, so I’m starting to get ready to purchase a few others. There are several separate varieties you might be interested in growing, and you’ll likely find one or other at local garden shops.

The first is Caryopteris x clandonensis called Blue-spirea, and it is a low-growing shrubby plant that only reaches two feet tall. Do not overfeed this plant as it will produce rampant growth but few flowers.

Feeding the soil is essential

A shovel of compost in the spring is all it requires to give you a great bloom. And it will flower heavily because all the flowers are produced on new wood, so cutting it back in the fall to ground level will not only help it survive, it will force it to produce lots of new shoots. It is these new shoots that will give the blooms, not the older surviving woody stems.

Look for ‘Blue Mist’ with powdery-blue flowers, ‘Dark Knight’ with deep blue-purple blooms, and ‘Ferndown’ with a dark green leaf and much darker flowers than the two already mentioned. The classic plant is one called ‘Arthur Simmonds’ and is a mid-blue.

Note that Mr. Simmonds was the originator of this fine-blooming hybrid cross. A gold-leaved variety called ‘Worcester Gold’ is readily available in garden centers, and while the fall flowers are a mid-blue, the leaves are golden-yellow.

The yellow in the leaves fade away as the season progresses, becoming more chartreuse in the later season. This plant is supposed to be more drought tolerant than some of the other Caryopteris.

Some other important Caryoptesis varieties

Another Caryopteris you’ll see is C. incana called Common Bluebeard, and this plant grows to 5’ tall in the full sun with moderate fertility. I note you may not get it this tall if it is only growing from shoots each year, but you can count on a three-foot-tall plant each summer.

Not only is this plant taller, but it has a more open and straggly appearance than the more compact plants above. You are, however, going to fall in love with the bright-blue flowers produced in a wild abandon in the late summer.

The most common variety of this plant that is sometimes sold is ‘Blue Billows,’ a somewhat more compact variety that is often grown as a trailing shrub over walls. It also blooms quite late in the season; look for blooms in September and October, but a hard early frost will stop those blooms in their tracks.

Given the seasons we’ve had lately, I’d be tempted to try it if I found one in a local garden center.

Caryopteris divaricata ‘Snow Fairy’ is a three-foot-tall plant with soft blue flowers, but this plant makes its mark because of a variegated leaf.

Each mid-green leaf is strongly edged in white. I’ll let you know about its hardiness in the spring as this is one plant I moved to last fall. It didn’t produce very well for me last summer, but then again, it was not in an ideal spot. I’m hoping it survives, and I get to try it again this coming year out in the full, hot sun.

If you’re looking for a challenge to your perennial-growing skills, this will be a welcome addition to the garden. Those blue blossoms in the fall are extremely valuable in garden design and will go quite nicely with any of the yellow blooming perennials so abundant at that time of year. Enjoy your well-growing Caryopteris Blue Mist Shrubs!

What is Asbestos Removal? Shocking Facts & Why You Should Abate It Today

Are You A Nuisance Gardener?