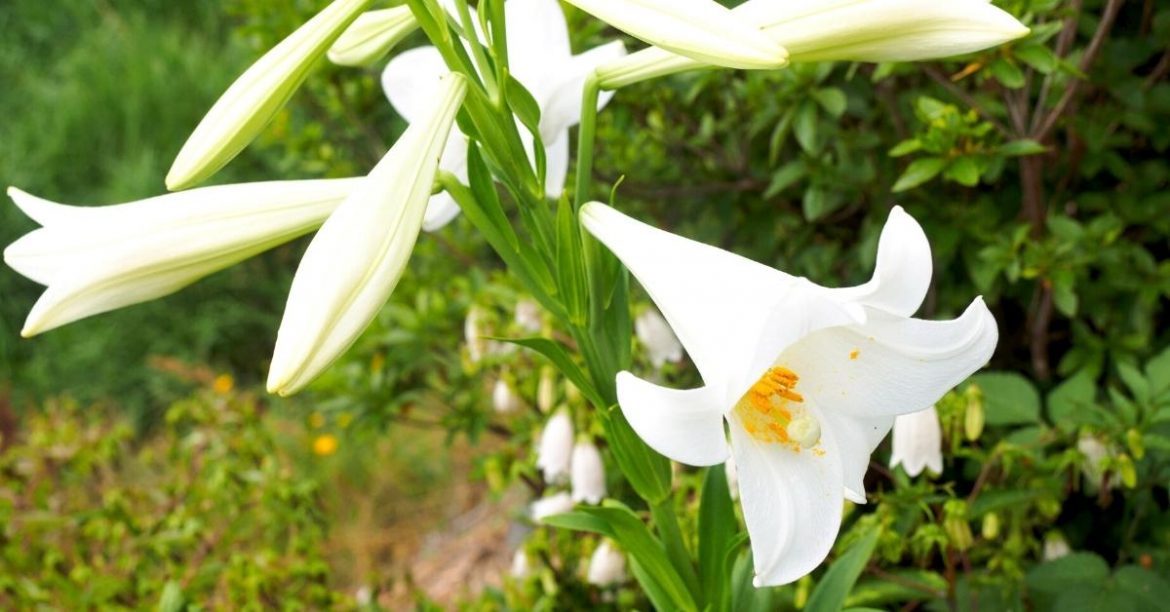 Madonna lilies have a very long history of cultivation. The Chinese and Japanese have been eating them for thousands of years, and while the Minoans of 4000 years ago perhaps didn’t eat them, they did put them on their famous ceramic pottery.

Some ceramic historians think the Minoan pottery is really from Atlantis; this means, of course, that Madonna lilies were known in Atlantis. A fact I’m sure will sweep summer cocktail parties like wildfire.

Origin: What is a madonna lily?

The Madonna Lily (Lilium candidum) is a member of the large genus of the lilies (Lilium) from the lily family (Liliaceae). It is native to the eastern regions of the Mediterranean and is one of the best known and longest cultivated lily species.

The Madonna lily is closely linked to the Virgin Mary in Christian mysticism as a symbol of purity, earning its trivial German name.

If you are a seed starter, simply give them a 90 day damp cooling period and then sow them in a flowerpot in a warm spot.

The cold phase can be achieved by putting the seed into a baggie with a bit of barely damp vermiculite. Put the baggie into the crisper drawer for 90 days.

Germination is slow and irregular, so don’t move the bulb until late in the summer when all the germinated bulbs can be moved at the same time.

Plant it at the same depth as it was in the seedling tray; it will adjust its own depth over the next few years.

Tag the spot, so you don’t lose it or dig it up by mistake, and then mulch in November of the first year with a pile of leaves or straw or something that will protect the tender transplant from winter ravages.

Leaf Appearance – What Does A Madonna Lily Look Like?

Once mature, this plant throws a rosette of leaves in the fall (unlike all other lilies), so do not weed it out thinking you are removing a late-emerging weed. 🙂

Madonna lilies grow persistent and herbaceous. Their flower stalks are up to 5 feet (1.50 meters) high. A down-to-earth rosette of leaves unfolds from the onion, which is up to 3.5″ (9 cm) wide.

The trademark of the Madonna Lily is its pure white flowers. Up to twenty large flowers stand together on one stem. The 2.5″-6″ (6 to 15 cm) long petals curve slightly backward and present the long stamens and the style in the center.

The elegant, wonderfully fragrant flowers of the Madonna Lily open in June and July and herald the meteorological midsummer. Warning: The pollen from lilies causes stains that are difficult to remove on clothing and table linen. In the case of cut flowers, it is, therefore, advisable to remove the stamens.

How To Grow Madonna Lilies

Well-drained but fertile soil. Clay will rot this bulb due to excessive moisture.

It is best to plant Madonna lilies in well-drained, sandy-loamy garden soil, in which no waterlogging occurs even in winter, as the onion can rot very easily. The lime-loving plant prefers soil with an alkaline pH value but can also tolerate slightly acidic soil.

The planting of the Madonna lily differs significantly from that of other lily species. The best time to plant the Madonna Lily is not in Autumn but in August. Since the onions are difficult to obtain in stores at this time, you should stock up on them in the previous year.

In contrast to other lilies, the Madonna lily bulbs are only five centimeters deep into the ground at intervals of 12″-20″ (30 to 50 cm) so that their tips almost protrude from the ground. Put the onion on drainage from a handful of sand or grit.

After filling, the bottom should be slightly arched so that rainwater can runoff. Then cover everything lightly to prevent dehydration. Madonna lilies can be planted both in the bed and in the pot.

How To Care For Madonna Lily

During its growing season, the Madonna Lily needs to be watered and fertilized regularly in the bed. After flowering, the dead inflorescences are removed. Put a compost mulch over the onions in the fall. In addition to good drainage, Madonna lilies in pots also need a regular supply of water and nutrients.

Ideally, long-term fertilizers are worked into the substrate before planting. If the stem is very high, support is recommended.

Not only did these poor lilies get eaten or preserved for posterity, but they were also the basis for a thriving pharmaceutical industry. The Roman Plinius recorded that salves and oils were prepared from the leaves and flowers and this used continued well into the 17th century.

If you were stung by a scorpion or bitten by a snake, then the Madonna lily was your prescription.

Rub it on stiff muscles or suffer from irregularity – rub it elsewhere.

It even got used as a distilled product for leprosy, bumps on the breast, and childbirth.

If one bruised a bulb and then rubbed the bruised bulb on the affected body part, it was said to be quite effective; it was reputed to cool infections, act as a diuretic, and a remedy for fluctuating fevers.

If you soaked the leaves in brandy and then applied them to a wound, the wound was said to heal uninfected.

Naturally, with a name like Madonna lily, the plant was also a serious cosmetic factory. Mix the petals with honey and apply them to your wrinkles to create wonderfully smooth skin is the recommendation from one writer. (All you wrinkled people out there can leave my lilies alone – get your own)

Lily oil from Persia was used by women who believed they would retain their youthful beauty forever if they bathed in the stuff. (Now those Persians were serious salesmen!)

My personal favorite and the reason I’m taking the garden label off the Madonna lily patch is that it was also used as an aphrodisiac and a central ingredient in magical love potions.

Now this wonderful lily came into cultivation through the crusaders bringing it back to their estates. I mean, if some Persian told you about this plant that would do all the things I’ve mentioned in the preceding paragraphs, wouldn’t you bring it back with you as well?

Chaucer mentioned in the Canterbury tales and Gerard’s Herbal, written in 17th century England records that it was commonly grown in the best gardens of the time. This is a plant with a serious history lesson to share.

How to Propagate Madonna Lilies?

It is also possible to reproduce productively via individual onion scales to which a piece of the onion base still adheres. In the spring, they are placed in seed trays with moist sowing soil to which a little algae lime has been added beforehand. Within a few weeks, new shoot buds form at the base of the scales.

If the Madonna lily is too wet, the onion will rot. In this case, the plant can no longer be saved. The most common pest that can attack the Madonna Lily is the lily chicken. The bright red beetle eats round holes in the lily leaves.

One generation can devour an entire plant. Regular collection of the beetles decimates the infestation. In the worst case, the plant must be treated with pesticides.